Most Powerful Development NGOs in the world

This is a ranking from FP magazine:

I am pretty much surprised that a NGO from Bangladesh is the most powerful development NGO in the world (or may be I have not heard about its good deeds!). A little bio about BRAC:

Founded in 1972 to assist refugees after Bangladesh’s war of liberation, BRAC, formerly the Bangladesh Rural Advancement Committee, is the world’s largest nongovernmental organization. It boasts a $4.6 billion portfolio in microloans, an army of healthcare volunteers providing care to 80 million Bangladeshis, and a network of 52,000 schools serving 1.5 million students. As one of Bangladesh’s largest single employers, BRAC is often referred to as a minigovernment, responsible in part for many of the country’s economic and health gains. It is estimated that, coupled with a government immunization drive, the organization’s antidiarrhea efforts in rural Bangladesh have helped cut child mortality for children under 5 from 25 to 7 percent over the past three decades. Its contraception drives and pioneering microlending have also been credited with lowering fertility rates and reducing poverty. Inspired by these results, BRAC recently extended its programs to sub-Saharan Africa and Afghanistan.

Water crisis is undeniable and the corruption challenge it faces is urgent. More than 1 billion people worldwide have no guaranteed access to water and more than 2 billion are without adequate sanitation. 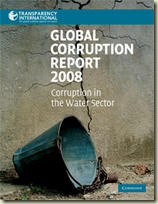 When corruption is part of the equation, the consequences for development and poverty reduction are dire. Corruption can increase the cost of connecting a household to a water network by more than 30 percent, raising the price tag for achieving the Millennium Development Goals for water and sanitation by a staggering US $48 billion.

Corruption in the water sector casts a wide and destructive net. Households pay with their health, as poor quality or non-existent water supplies increase their vulnerability to deadly diseases: in developing countries 80 percent of health problems can be linked to inadequate water and sanitation.

So what's the implication for the Nepalese economy? Note that water sector is one of the most easy breeding grounds for corrupt officials. Here is an article from The Kathmandu Post:

Nepal's development hangs on the proper utilization of its water resource. Water is the only resource that is abundantly available in Nepal and it is the resource that has less been under utilized. With around 77 percent of the population having access to some basic drinking water facilities and 46 percent having sanitary services; 49 percent served by electricity and 68 percent of the land having some access to irrigation facility, the potentiality for realising water sector is immense. If these figures are mind boggling, how about 78,000 Nepali children, including 50,000 girls, engaged in fetching water? Besides economics, fighting corruption in water sector is also a moral issue.

Posted by Chandan Sapkota at 10:42 AM No comments: