Costs and benefits of remittances in Nepal

Remittances now account for almost 23 percent of Nepal’s GDP. About one-third of working male population is estimated to be outside the country remitting money back home, making remittances the largest foreign currency earner. Here is a discussion on how remittances performed during the global economic crisis. Here is more.

Below are findings from the latest WB report. I have not received the full report yet, but these points are extracted from presentation slides of the authors (here and here). (It is strange that the WB Nepal office did press conference about the study and then not release the full report immediately.)

The WB report argues Dutch Disease effects are seen in the economy. It shows that while remittances are increasing, manufacturing (% of GDP) and exports (% of GDP) is declining. 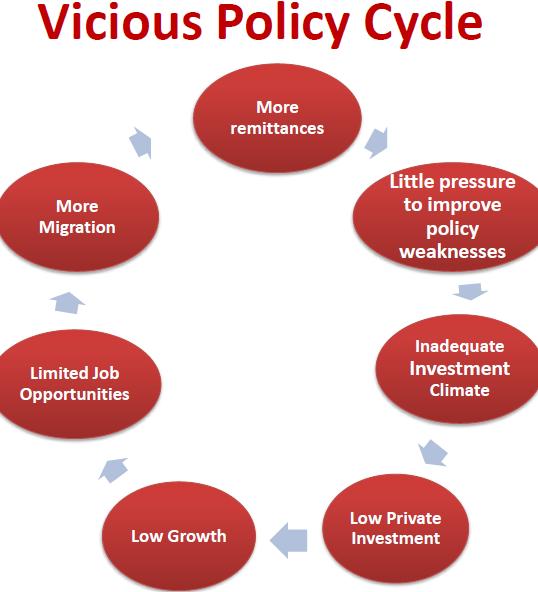 That said, a true picture of remittances use and abuse and the stock of migrants is still in estimation phase. The true picture will come out with the completion of Census 2011. Numbers on stock of migrant, destination, channeling of income through informal means, those in India and the total sum they sent, and more will be clear once the Census 2011 data are crunched.

Meanwhile, the approximation of the migrants stock and various estimates will be convincing once the entire report is published. The claim of full fledged Dutch Disease effect might be a little over stretched. I think there are symptoms but it is not in a full fledged mode. Remittances have definitely increased imports and consumption, pushing up demand. But, the increase in demand is mostly of durables, which are usually imported and not manufactured in Nepal. The erosion of manufacturing capacity has got more to do with adverse political and investment climate (which in turn has little to do with increasing remittances). There is low appropriability of private returns to investment. Supply side issues are contributing to increasing general prices, which then led to adjustment of wages in the annual budget. Anyway, I think the symptoms of Dutch Disease are definitely there, but it in itself in full effect is doubtful. I will have to see the full reasoning in the report when it comes out.

A little more on the Dutch Disease effect: As domestic income increases due to remittances, aggregate demand and spending goes up as well. This puts pressure on nontradables in the domestic market, leading to rise in demand and output. But, due to high demand wages also tend to increase in all the sectors, both tradable and nontradable. It will increase cost of production throughout the economy, leading to squeezing profits in the nonresource tradables sector (manufacturing), whose prices are pretty much fixed in the international market. This means customers will look for substitutes at cheaper price, thus reducing domestically produced nonresource tradables. This gradually erodes the existence of the whole sector itself. Note that price of nontradables are set in the domestic market, but the price of tradables are set in the international market. Meanwhile, since incomes are higher from migration, capital and labor are attracted to this sector from other sectors of the economy, reducing output and labor supply in the latter ones.

UPDATE (2011-07-08): Well, I just got a summary of the report (forthcoming). It clarifies that Dutch Disease symptoms are seen (not exactly Dutch Disease effect). Here are main points from the summary.