Global growth drivers and policy challenges for the next 50 years

A latest OECD Economics Department policy note argues that growth in the next few decades will slow down and most of the growth will come from developing and emerging economies. The main drivers of growth will be innovation, skills and knowledge-based assets as population growth will continue to decline.

While growth will be more sustained in emerging economies than in advanced economies, it will still slow down due to less population growth and less scope for catching up to the standards of living of the most advanced countries (Figure 1). Even if the retirement age is increased, population ageing will result in a declining or at best a stable labour force in most economies. Against this backdrop, future gains in GDP per capita will become more dependent on accumulation of skills and, especially, gains in productivity driven by innovation and the accumulation of knowledge-based assets -- such as organisational know-how, databases, design and various forms of intellectual property (OECD, 2013).

Global exports will continue to outpace GDP growth over the next half century with an increasing role of non-OECD economies in the global market. Exports in relation to GDP will on average rise by 60% between 2010 and 2060, and relatively closed (and large) economies as the United States and Japan will in 2060 be as open as the United Kingdom is today. As a result trade integration will keep rising, though at a slower pace than in recent decades.

The major policy challenges identified in the report are: 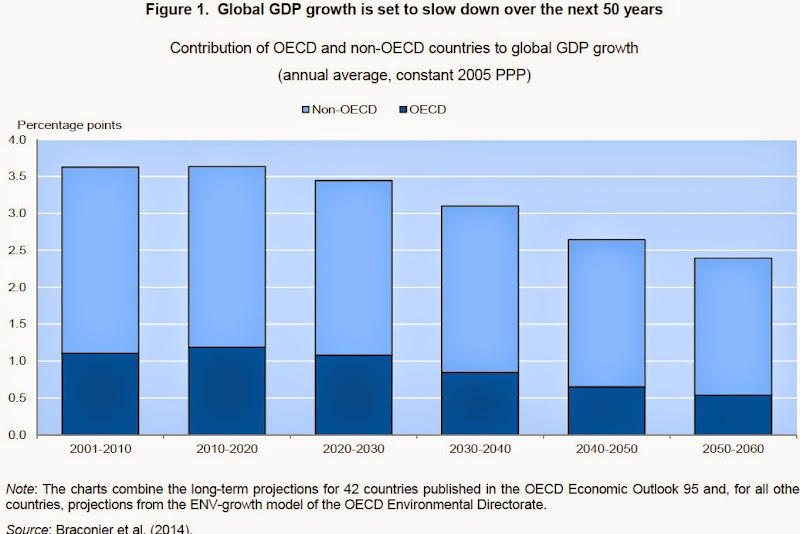 Posted by Chandan Sapkota at 3:33 PM No comments: