Finally after two years of political bickering, the political parties have chosen Pushpa Kamal Dahal aka Prachanda, the head of the Maoist guerrillas (former) who waged a bloody decade long war against the monarchy and state, as the first prime minister of the Federal Democratic Republic of Nepal. More here. 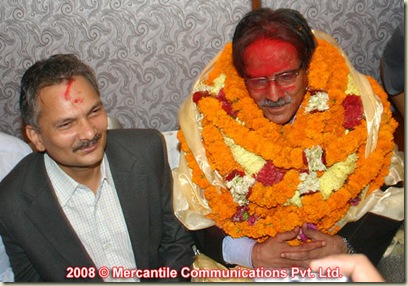 It needs to be seen how Prachanda tames his belligerent guerrillas currently stationed at different cantonments supervised by the UN. Also, it needs to be seen what form of political and economic system Nepal would follow under his leadership. My concern about too many potential red tapes here. There will be more questions raised about the Maoists' bullying nature and their ability to lead the nation through the path of peace, which Nepal has barely witnessed in the past two years.

Posted by Chandan Sapkota at 9:08 PM No comments:

Keynes got it right but ...

Krugman recalls Keynes while explaining why nationalism, militarism and imperialism might overturn the gains from and prospects of globalization:

...Writing in 1919, the great British economist John Maynard Keynes described the world economy as it was on the eve of World War I. “The inhabitant of London could order by telephone, sipping his morning tea in bed, the various products of the whole earth ... he could at the same moment and by the same means adventure his wealth in the natural resources and new enterprises of any quarter of the world.”

And Keynes’s Londoner “regarded this state of affairs as normal, certain, and permanent, except in the direction of further improvement ... The projects and politics of militarism and imperialism, of racial and cultural rivalries, of monopolies, restrictions, and exclusion ... appeared to exercise almost no influence at all on the ordinary course of social and economic life, the internationalization of which was nearly complete in practice.”

But then came three decades of war, revolution, political instability, depression and more war. By the end of World War II, the world was fragmented economically as well as politically. And it took a couple of generations to put it back together.

So, can things fall apart again? Yes, they can.

Consider how things have played out in the current food crisis. For years we were told that self-sufficiency was an outmoded concept, and that it was safe to rely on world markets for food supplies. But when the prices of wheat, rice and corn soared, Keynes’s “projects and politics” of “restrictions and exclusion” made a comeback: many governments rushed to protect domestic consumers by banning or limiting exports, leaving food-importing countries in dire straits.

And now comes “militarism and imperialism.” By itself, as I said, the war in Georgia isn’t that big a deal economically. But it does mark the end of the Pax Americana — the era in which the United States more or less maintained a monopoly on the use of military force. And that raises some real questions about the future of globalization.

...the belief that economic rationality always prevents war is an equally great illusion. And today’s high degree of global economic interdependence, which can be sustained only if all major governments act sensibly, is more fragile than we imagine.

Posted by Chandan Sapkota at 8:13 PM No comments:

Marriage between markets and regulation

The head of the UNDP says we need more regulation that does not stifle individual/market incentives:

Even very strong supporters of “capitalist globalization” believe that greater and more effective regulation is needed to make what some call “financial capitalism” sustainable...What we need to invent and develop are regulatory mechanisms that, on the one hand, don’t stifle private initiative and the creative energy of a market economy, but on the other hand, are very effective in their correction of the market failures that lead to excesses and misallocation of resources. We must also remember that democratic societies can only function well if the results achieved by the market economy are politically acceptable. The current global financial crisis provides a stark example of the consequences of missing and misguided regulation in the market economy.

Read the Q&A with Kemal Dervis, head of the UNDP here.

Posted by Chandan Sapkota at 6:37 AM No comments: