Linkages between trade and climate change

Here is how trade contributes to climate change: The reduction in average tariffs in major export destinations and the booming trade has also increased production and economic activities. This means it has also increased GHG emissions, which are the major causes of climate change as humans are mostly responsible for the increase in temperature especially in the last 50 years. 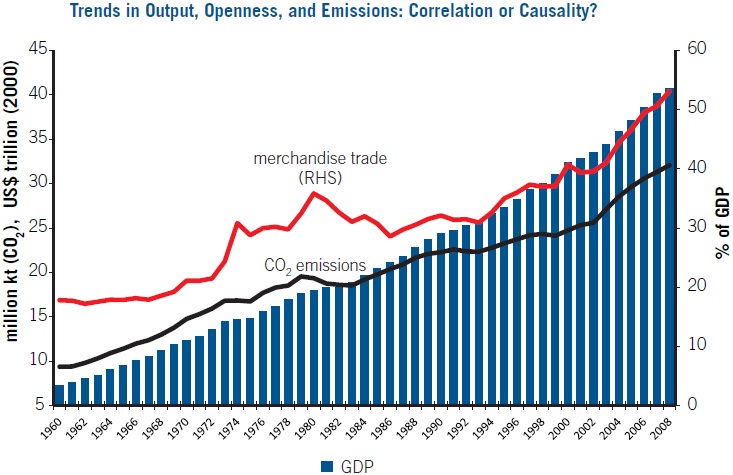 In a new research note (the above figure is extracted from the same paper), Canuto and Onder provide that three ways through with trade intensity affects emissions.

Here, 3 would reduce emissions; 2 would result in neutral outcome as, theoretically, if everyone specializes in production where they have comparative advantage, then one might focus on emission boosters and others emission reducers, leading to existing levels of emissions; 1 would increased emissions.

The questions faced by policymakers is: How to boost prosperity without increasing emissions and the lowest cost possible? Looks like 3 is the best option but then it might not be fully financially and technically viable when viewed from developing country perspective. The added cost of adopting such method of production at the country level (i.e. without international common standards) would mean decrease in price competitiveness and loss of export markets. Hence, the unwillingness of rapidly growing economies to comply with strict emission reduction standards.

Canuto and Onder argue that “trade may help mitigate climate change, as long as the temptation to resort to inappropriate trade policies is avoided.” For this, implementation mechanisms need to be very explicitly well defined in multilateral agreements. To make trade and climate change policies compatible, they say:

[…] multilateral investigations are necessary for jointly accepted trade and climate policies. Careful and detailed definitions of implementation tools and procedures are crucial in preventing the undesired protectionist consequences of trade policies.

Regarding Nepal’s emissions level, here are some stuff from a previous blog post:

As expected, emission levels are very low in Nepal. But, annual temperature change between 2045-2065 (relative to the control period 1961-2000) is projected to be higher than in even Bangladesh, China, India and the USA. Hot days and warm nights are expected to increase by 2.5 days and 8 days respectively between 2045-2065 (relative to the control period 1961-2000). 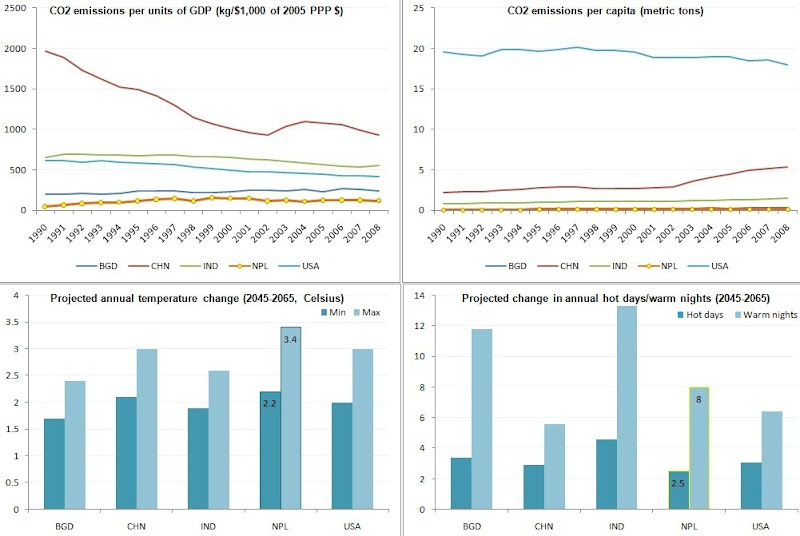 And, here is how climate change will impact agriculture production and trade in South Asia:

Climate change affects agricultural yield, which in turn has a strong bearing on economy and livelihoods. It alters comparative advantage in the trade of agricultural goods. Due to an expected decline in yields, potential restrictions on food trade and food- price inﬂation, food insecurity might increase. Against such a backdrop, apart from attempts to reduce agricultural as well as non-agricultural emissions and smoothen trade ﬂows, adequately funded and concerted adaptation measures have to be implemented in South Asia.

Posted by Chandan Sapkota at 3:41 PM No comments: