Posted by Chandan Sapkota at 11:34 PM No comments:

Email ThisBlogThis!Share to TwitterShare to FacebookShare to Pinterest
Labels: Economic Growth, Trade, US

The ultimate news source about Nepal

A new news portal is launched today in Nepal. It is titled Republica, a national daily plus news portal about Nepal. Senior journalists, some of whom I know and have worked with in the past, are working in this new media house (Dhumbarahai Media). It is going to be the ultimate one-stop source of news and information about Nepal. A Nepali version is named Dainikee.

Below is a snapshot of the first-ever homepage of www.myrepublica.com: 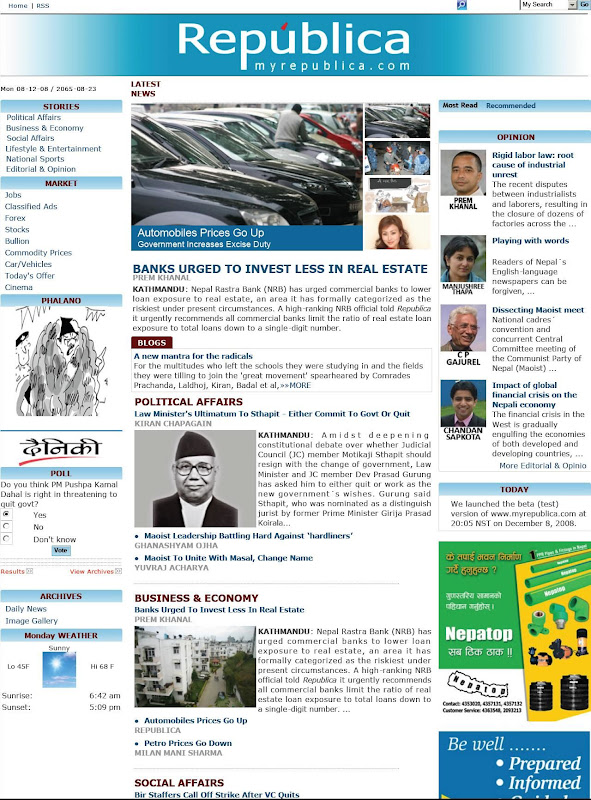 Posted by Chandan Sapkota at 11:24 PM No comments:

Stiglitz argues that the financial crisis has made it clear that we all are Keynesians- admit it or not! The two quite vocal Keynesians- Krugman and Stiglitz, both Nobel laureates, have been arguing that monetary policy might not work now as the interest rate has already hit rock bottom and increase in money supply has not been able to affect economic activity. So, time to raise Keynesian wand! He worries about the potential misuse of Keynesian doctrines.

Economic theory had long explained why unfettered markets were not self-correcting, why regulation was needed, why there was an important role for government to play in the economy. But many, especially people working in the financial markets, pushed a type of “market fundamentalism.”

Keynes argued not only that markets are not self-correcting, but that in a severe downturn, monetary policy was likely to be ineffective. Fiscal policy was required. But not all fiscal policies are equivalent. In the US today, with an overhang of household debt and high uncertainty, tax cuts are likely to be ineffective (as they were in Japan in the 1990s). Much, if not most, of last February’s US tax cut went into savings.

...That necessitates restructuring both tax and expenditure programs. Lowering taxes on the poor and raising unemployment benefits while simultaneously increasing taxes on the rich can stimulate the economy, reduce the deficit, and reduce inequality. Cutting expenditures on the Iraq war and increasing expenditures on education can simultaneously increase output in the short and long run and reduce the deficit.

Today, the risk is that the new Keynesian doctrines will be used and abused to serve some of the same interests. Have those who pushed deregulation 10 years ago learned their lesson? Or will they simply push for cosmetic reforms — the minimum required to justify the mega-trillion dollar bailouts? Has there been a change of heart, or only a change in strategy? After all, in today’s context, the pursuit of Keynesian policies looks even more profitable than the pursuit of market fundamentalism!

More on similar stuff here.
Posted by Chandan Sapkota at 12:32 PM No comments:

Posted by Chandan Sapkota at 8:03 AM No comments: