The change in total foreign exchange reserve in the first quarter of this fiscal year and the first quarter of last year was -11% and 8.5% respectively. It is sufficient to finance merchandise imports of 8.5 months and merchandise and service imports of 7.2 months. Also, the Nepalese exchange rate appreciated by 5.96 percent in mid-October 2009. It has depreciated by 11.50% in the corresponding period last year. This might partly explain the drop in exports and rise in imports. The main factor is imports financed by rising remittances.

Nepal needs to find a way to better channel remittances in the domestic market (other than the bubbling real estate market) rather than smoothening remittance money back to the destination. Tax imports of vehicles; not food (it will further drive up inflation--subsidize agriculture production, especially staple food crops). Prem Khanal raises an alarm (not sure how far this is going to ring the bell as the bad BOP situation in 1Q might might be countered by improvements in other quarters, leaving the average BOP figure in a comfort zone) and offers some options. One thing that is certain and requires urgent action from the NRB and the government is narrowing down of the widening balance of trade (BOT) hole. Thought it has been increasing for some years now, what is alarming is that the rate of increase in trade deficit is much higher in recent years. Ameet Dhakal offers interesting perspectives on this issue and how the government can help the economy dig out of hole it is in right now (again, I am not going to speculate yearly BOP and macroeconomic trend and if they are going to be in the red, creating macroeconomic instability--except for BOT-- just depending on first quarter figures). 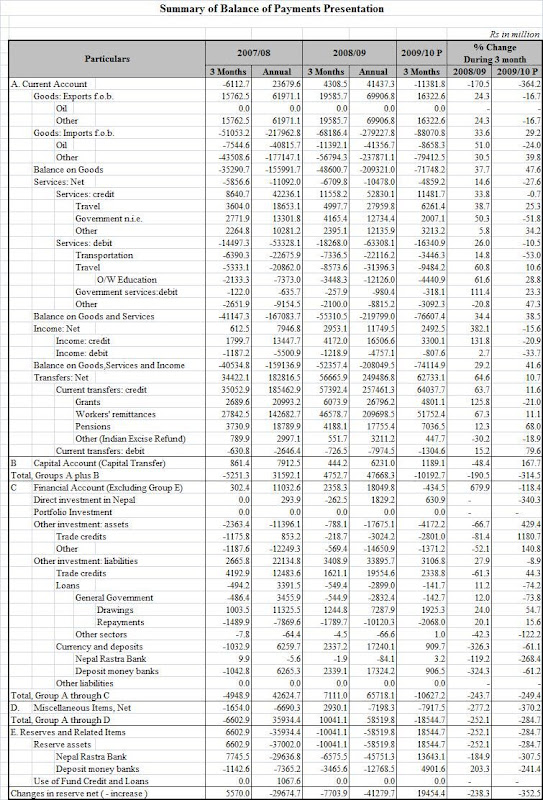 UPDATE: Raghab Pant explains why it is not new thing. I concur.

I don’t see any new problem emerging; it is the continuation of the same old problem except that the government is not yet ready to change the exchange rate of the Nepali currency. On the contrary, they are trying to find a way to impose some restrictions on the import of goods and services from India to maintain current exchange rate. In fact, the central bank, according to newspaper reports, has already issued several directives to the commercial banks to impose restrictions on financial transaction with India. Otherwise, it is not a new problem and the Ministry of Finance is well aware of the situation of the banking system as it has representation in the Board of Directors of the Nepal Rastra Bank too. So the main question is: What were the members of Board of Directors of the Nepal Rastra Bank doing when the country was certain to hit the iceberg?

Posted by Chandan Sapkota at 5:22 AM No comments: