Bhagwati on the financial mess

Jagdish Bhagwati calls for a truly independent commission of experts to scrutinize each financial innovation’s potential downside. He terms the back-and-forth appointment of bigwigs from the Wall Sts to Treasury department and then again to the Wall Sts a “Wall Street-Treasury Complex”. Nice naming there!

When the dust has settled, we must ask the question: why did this crisis occur? There are specifics that are not applicable everywhere. The crisis was, for example, kicked off by highly leveraged lending for uncreditworthy mortgages by the quasi-governmental Freddie Mac and Fannie Mae. But the problems became huge because “policy innovations” had been racing ahead of comprehension. The securitisation of mortgages was an innovation that led unwittingly to what Wall Street calls “betting the company”. Credit-default swaps allowed AIG to bring in huge returns but at high risk if things went wrong, which they did.

The Long Term Capital Management crisis had a similar problem. At its heart were derivatives that no one quite understood. …The downside had not been anticipated.

The failure to think about the downside results from what I call the “Wall Street-Treasury Complex”. Robert Rubin went from Goldman Sachs to the Treasury and back to Citigroup. Hank Paulson went from Goldman Sachs to the Treasury and will doubtless return also to Wall Street. This network shares the optimistic scenarios that Wall Street spins. Mr Rubin was in charge of the Treasury during the Asian financial crisis, whereas Mr Paulson was among the five major investment banking chief executives who persuaded the Securities and Exchange Commission not to extend prudential reserve requirements to their companies.

The question is: how can you assess the downsides without first letting the innovation play into real economy? If something is an innovation, then it is a new thing, which essentially means that even the innovator is not fully aware of its full potential or risks or downsides. The innovator can argue that the innovation will work by showing high degree of success (i.e. the probability of success might be pretty high). But this itself is not fully guaranteed because no one can test innovation against unexpected circumstances or yet-to-be-known risks. The best way to assessing downsides of an innovation would be to periodically review its impact on the economy—this means that you cannot test an innovation beforehand because you don’t know the set of circumstances under which it will not work (the innovator might have an idea of the set of circumstances where it can work, but he or she cannot list the full elements of the set). But having a regulatory authority that can assess risks beforehand is a good idea. We are yet to have one of these things in the world! Anyway, thats it for now. Its getting too late. Time to go to bed!

Posted by Chandan Sapkota at 12:13 PM No comments:

Nice sentences about a good economist

Sourced from The Economist:

In neither contribution did Mr Krugman claim great originality for his ideas or great realism. His achievement was to formalise insights that many people had previously had informally. Ideas that had fluttered in and out of people’s grasp for decades, he pinned down like a butterfly on display. Sometimes a good economist, like a good columnist, succeeds not by making a point before everyone else, but by making it better than anyone else.

Posted by Chandan Sapkota at 9:56 AM No comments:

Policy Innovations has a nice article about resource curse, weak government, and violence in the Democratic Republic of Congo (DRC):

The DRC's turmoil can be traced to the country's toxic combination of tempting mineral wealth, feeble government, vast size, and weak cohesion. This mixture turns the DRC's rich natural resource heritage into a poison that affects every aspect of its body politic.

Instead of acting as the country's economic engine, the plentiful deposits—including uranium, diamonds, and copper—have repeatedly fueled violent conflict and corruption. Local militia and foreign armies smuggle vast amounts out of the country—an estimated $400 million in diamonds and gold alone have been lost this way annually in recent years—while doing everything within their power to prevent a weak state from establishing its authority.

Barely connected to each other by meager transportation, communication, and institutional links, local groups have little reason to profess loyalty to an ineffective and distant state—and every incentive to seek enrichment at that state's expense. As a result, the country's history has been plagued by a zero-sum competition among mutually antagonistic cities, regions, and ethnic groups.

The author argues that traditional Western prescription-elections, economic reform, and administrative restructuring- of fixing conflict-prone countries is not going to work. He recommends three institutional innovations:

Posted by Chandan Sapkota at 12:40 AM No comments:

The dismal output from trade liberalization in Africa

What happens when trade liberalization is not followed by reforms in structural and institutional constraints? Well, the level and composition of exports will not change and will lead to decrease in market share as foreign goods and services flood domestic market, which lacks strong industrial background. According a report from UNCTAD, trade liberalization in Africa in the past 25 years has led to decrease in market share for world exports from 6%  in 1980 to 3% in 2007. Moreover, there is barely any headway in the level and composition of exports.

The report highlights that despite trade liberalization, the African countries have not diversified their exports towards more dynamic primary commodities and manufacturing goods, which are less prone to the vagaries of international markets. The report attributes Africa’s weak supply response as the most important impediment to the continent’s export performance. It recommends that future export policies should focus more on way to increase production for export.

In a way the report declares that the structural adjustment programs, spearheaded by the IMF and the WB, in Africa was a complete failure. By 1985, 60% of African countries were under the SPAs and by 1995, almost all the African nations were under the such programs. The result after two and a half decades: dismal performance in the very sector the reform programs were supposed to help Africa grow! The Washington Consensus was an utter failure in Africa.

Export diversification is very low in Africa. African countries remain principally primary commodity exporters and the dependence of African countries on a small number of export products has increased in the period following liberalization. Many countries in the region are at present less able to withstand price shifts for a few key  commodities than they were prior to liberalization.

The tide of trade liberalization (cut high taxation and “getting prices right”)was expected to increased production of tradables, generate positive externalities for the economy by improving efficiency of production, generate substitutions effect so that price of imported inputs were lower and thus promote exports by increasing production, increase investment both from domestic as well as foreign investors, etc. However, huge subsidies in the US and EU on agricultural sector basically wiped off the African agricultural base because cheap products not only displaced African agriculture production in the market but also created disincentives among farmers to engage in agriculture, leading to high dependence rate on foreign food aid and imports.

Production and marketing costs increased during liberalization, with the removal of subsidies and currency devaluations, while the dissolution of marketing boards added price risks to the uncertainties of rain-fed agriculture. The consequence is that much of Africa continues to be dependent on traditional bulk agricultural commodities for a major share of its export earnings. Paradoxically, African countries have been losing market share to other developing countries even in exports of these commodities.

The report recommends increase in public investment in R&D, including roads and irrigation facilities, health and education. Also, facilitating access to inputs, encouragement of new investment, and better access to market information would help improve overall efficiency in agricultural trade. The point that remains unanswered is: how much of a damage does subsidies inflict on agriculture development in Africa.

For the manufacturing sector the report recommends to:

The report states that trade liberalization should not be seen as an end in itself; it should be a subset of a comprehensive developments strategy. Focus should be shifted back to the development strategies that are consistent with the development challenges and priorities of African countries. 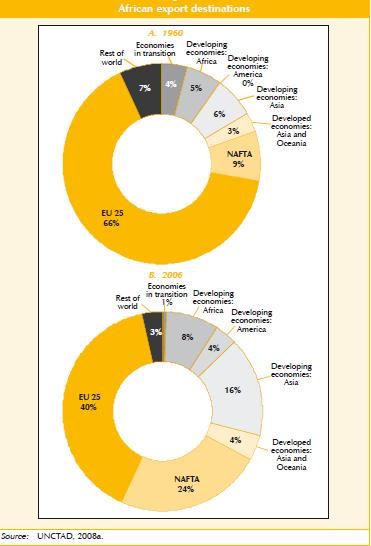 Posted by Chandan Sapkota at 12:17 AM No comments: