The cost of informality in economy

Here are excerpts from an interesting piece on the increasing size of informal economy. Informal companies have substantial cost advantage by avoiding taxes and regulations, which in turn offsets the cost of their low productivity and small scale production. Informality is highest in services sector, particularly retail business.

Diana Farrell, director of the McKinsey Global Institute and a principal in the San Francisco office, argues that informality stifles economic growth (reducing tax receipts of governments, which then must raise the tax rates imposed on formal businesses) and productivity by keeping companies subscale and unproductive (operate at just half the average productivity level of formal companies in the same sectors), and aid companies to take market share from bigger, more productive formal competitors (as the cost benefit of avoiding taxes and regulations often amounts to more than 10 percent of the final price). Farrell argues that the assertion that informal businesses might grow and join the formal economy is a myth.

Btw, the size of shadow economy/informal economy in Nepal in 2007 was 37.5 percent of GDP. 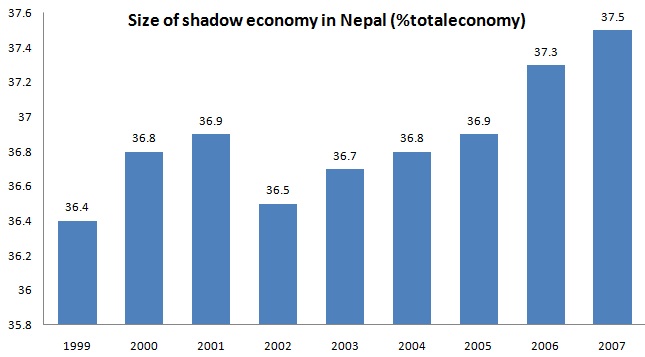 Anyway, below are excerpts from the MGI’s analysis on informality:

Informality is among the most seriously misunderstood of all economic issues. Informal companies evade fiscal and regulatory obligations, including value-added taxes, income taxes, labor market obligations (such as social-security taxes and minimum-wage requirements), and product market regulations (including quality standards, copyrights, and intellectual-property laws). Evasion varies by sector and by the nature of the business: informal retailers tend to avoid paying value-added taxes, informal food processors to ignore product quality and health regulations, and informal construction firms to underreport the number of employees and hours worked.

For many people, the informal economy means street vendors and tiny businesses, and it is true that informality is pervasive among small, traditional concerns with low levels of technology, scale, and standardization. But it is hardly unknown among larger, modern enterprises in developing countries, where MGI has found informal supermarket chains, auto parts suppliers, consumer electronics assemblers, and even large-scale industrial operations.

The extent of informality varies from industry to industry. It is greatest in service businesses such as retailing and construction, in which companies are often small in scale and geographically dispersed, making it easier to avoid detection. Revenues come from individual consumers and are difficult for auditors to verify. Labor costs are a significant share of total expenses, so companies are tempted to underreport employment. In one country, MGI found that construction workers ran away from sites when government inspectors appeared.

For similar reasons, informality in manufacturing industries is more prevalent in labor-intensive sectors such as apparel and food processing than in capital-intensive ones such as automotive assembly, cement, oil, steel, and telecommunications. Even so, some very large industrial and manufacturing companies operate informally. In India and Russia, for instance, local governments force local power companies to provide free energy to some businesses; subsidies such as these allow informal businesses to continue operating.

How to control informality?

Posted by Chandan Sapkota at 12:24 AM No comments: