Specifically, construction sector is projected to grow at the fastest rate (10.6%, down from 12.4% in FY2017) followed by mining and quarrying (10.5%, down from 13.7% in FY2017). Two consecutive years of double-digit growth of these sub-sectors indicates acceleration of post-earthquake reconstruction of public and private infrastructure. Overall, robust industrial activities is underpinned by post-earthquake reconstruction and improved supply of electricity (manufacturing growth is equally strong at 8%). Rising inward tourism and associated activities also contributed to hotels and restaurants growth of 9.8%, up from 7.3% in FY2017. 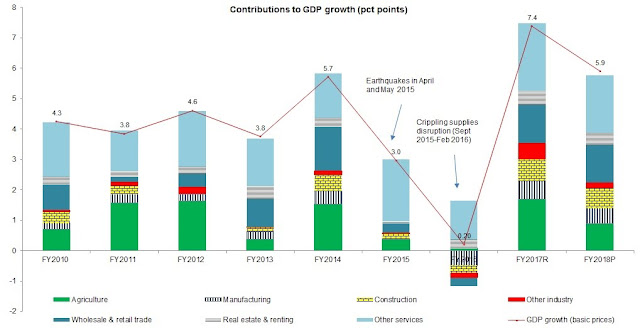 Agricultural output is projected to grow at the slowest rate at 2.8%, down from 5.2% in FY2017, largely due to the decline in paddy output (negative 1.5%), which has a weigh of 20.8% in overall AGDP basket due to the uneven monsoon rains and flooding in Terai region. Agricultural commercialization, availability of chemical fertilizers and irrigation facilities were not sufficient to offset the denting effect of unfavorable weather pattern.

Industrial output is projected to grow at 8.8%, down from 12.4% in FY2017. Construction, and mining and quarrying activities are projected to contribute 0.7 and 0.05 percentage points, respectively, to overall GDP growth. Mining and quarrying of stones, sand, soil and concrete have intensified in response to large and growing demand for reconstruction activities. Similarly, construction activities intensified thanks to progress in large infrastructure projects such as Melamchi water supply and Upper Tamakoshi hydroelectricity (both are expected to be completed this year). Manufacturing sector is projected to grow at 8% and contribute 0.5 percentage points to overall GDP growth. Stable supply of electricity and improved industrial relations have contributed to strong manufacturing output growth. Its share of GDP has increased marginally to 6.4% from 6.2% in FY2017. Electricity, gas and water sub-sector is projected to grow at 5.8%, down from 20.5% in FY2017, due to an expected 82 MW of additional energy generation by the end of FY2018 (it was 118 MW in FY2017). 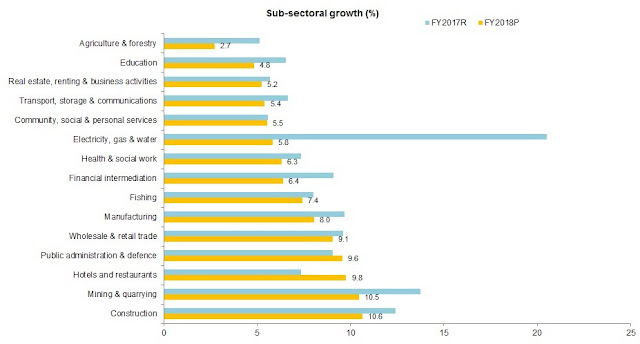 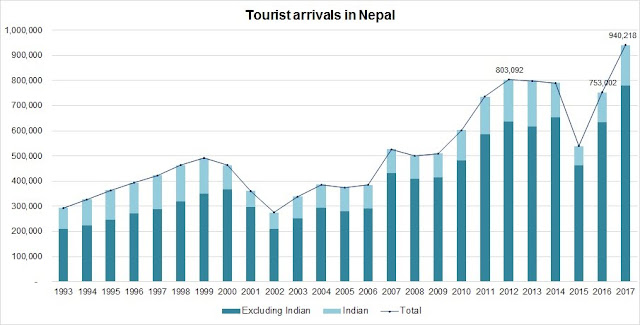 Expenses related to three tiers of elections and additional wages and allowances for public officials deputed to local bodies and for reconstruction works are expected to support public administration and defense sub-sector’s growth. Meanwhile, wholesale and retail trade (which accounts for about 13.6% of GDP) is projected growth at 9.1%, up from 9.6% in FY2017 on account of higher import of goods and increase in production of industrial and agricultural related goods.  Financial intermediation is projected to grow by 6.4%, largely contributed by income of NRB, BFIs, insurance board and companies, securities board, EPF and CIF among others. Health and social work subsector is projected to grow grow by 6.3%  due to the increase in number of patients at hospitals and healthcare activities in and of public and private sectors. Similarly, community, social & personal services sub-sector is projected to grow by 5.5% on account of public spending at central and local levels, and entertainment services provided by public and private FM radio stations. Transport, storage and communications; real estate, renting & business activities, and education sub-sectors are projected to grow at a lower rate than in FY2017. 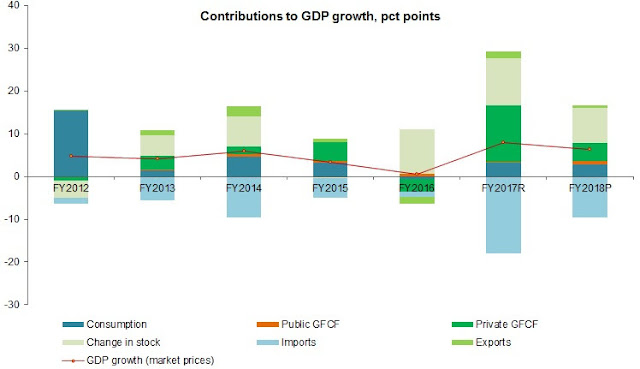 First, the growth boost is coming from reconstruction works albeit at a modest pace. Two consecutive years of double-digit growth of mining & quarrying, and construction points to this fact. Also, it is largely driven by public investment (potentially includes accounting of transfers to local bodies that is not spent yet). In fact, public GFCF is expected to grow by 14.9%, sharply up from 4.1% in FY2017 . This is also reflected by the 9.6% growth of public administration and defense. So, the negative impact of unfavorable weather is more than offset by increase in public spending (need to see how much of the projected spending is actually realized as capital spending till mid-April was just 35% of  budget capex) on elections, reconstruction, and mining & quarrying activities. Last year, growth was driven by private GFCF.

Second, retail and wholesale trade’s growth projection is a bit optimistic given that remittances, which finances imports, has been decelerating and most of the increase in imports is account for by capital goods as opposed to daily consumable retail and wholesale goods. However, the expectation is that the dent in demand caused by deceleration of remittances, which mainly finances imported consumable goods, will be more than offset by direct and indirect elections related expenses, which also increase demand for daily consumable goods and services. There is massive temporary employment (police personnel, poll observers, awareness campaigns, etc), and expenses on travel, food and retail goods during elections. A marginal optimistic growth projection for retail and wholesale trade activities makes a huge different to overall growth rate because its share in GDP is the largest and also contributes the most to GDP growth rate.

Third, except for hotels & restaurants, public administration & defense sub-sectors all other services activities decelerated compared to FY2017. So, the boost is actually coming from public spending on reconstruction and elections, and partly from increased tourism activities. Some folks might quickly interpret it as a resurging Nepalese economy. This may be a bit misplaced because FY2017’s growth of 7.4% at basic prices (7.9% at market prices) was largely due to base effect (recovering from lingering effects of earthquakes in FY2015 and crippling trade blockade in FY2016 as well as favorable monsoon), improved energy supply, and some pick-up in reconstruction. This year’s growth should also be seen from that perspective but the driver is public spending on reconstruction and elections. This in no way means that the economy will continue to grow at this rate in FY2019 unless there is at least a comparable acceleration in public capital spending and private economic activities (apart from other usual factors such as favorable monsoon, which is likely given forecast so far).

Fourth, some of the reasons for higher growth this year are pretty much the same (Melamchi and Upper Tamakoshi, reconstruction, etc) as in last year. This indicates that if public capital spending accelerates, then it gives a good boost to overall GDP growth. 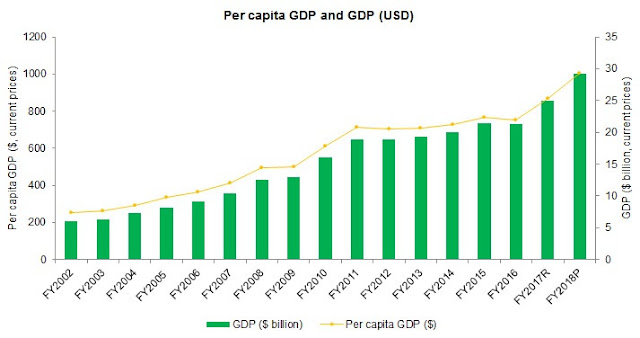 Fifth, per capital GDP has increased to US$1003.6, thanks to a double-digit growth of nominal GDP (13.8%, down from 17.3% in FY2017 – highest since FY2010) and a slight appreciation of Nepalese rupee vs US$ (CBS assumes constant population growth rate of 1.4%). Note that CBS used monthly average middle of buying and selling rates during the first eight months (NRs102.96). Usually, monthly average of buying rate is used. It was NRs102.75 in the first eight months of FY2018. Per capita GDP and size of GDP might change a bit once the full fiscal year monthly average exchange rate is available sometime around mid-August. But, note that real GDP per capita growth is 4.9% and nominal GDP per capita growth is15.8%. For now, the size of the economy is projected to increase to US$29.3 billion from US$25 billion in FY2017.

Sixth, per capita gross national disposable income (which factors in remittances as well) is projected to be US$1296.6, up from US$1159.2.

Seventh, the claim that the previous government handed over a badly managed economy doesn’t stand now at least with respect to real sector (note that this is different from the claim of a badly managed fiscal situation when there was change of guard at MoF). Fiscal, monetary (particular financial) and external sectors will see deterioration anyway in FY2018.

Eight, as mentioned in previous blog posts the economy can sustain growth of over 7% with an appropriate mix of macroeconomic strategies, financial arrangements, smart project execution, and supportive institutions and policies. Government has an important role to play in providing critical infrastructure, addressing market failures, designing a growth-enhancing tax regime, and implementing business-friendly policies to usher in a meaningful structural transformation. It also needs to enhance both the quantum and quality of public capital spending to over 8 percent of GDP annually. Given the sound fiscal space, though Nepal doesn’t have a shortage of funds until medium-term, a dearth of capacity to fully execute the budget and finish projects on time may prove problematic.

Finally, FY2018 and FY2017 figures are provisional and revised, respectively.
Posted by Chandan Sapkota at 11:16 AM No comments: