Lagi, Bertrand and Bar-Yam show that the timing of violent protests in North Africa and the Middle East in 2011 as well as earlier riots in 2008 coincides with large peaks in global food prices. So, yes rising food prices (above a certain threshold) might induce riots and political instability.

They identify a specific food price threshold (the FAO’s Food Price Index of 210; the index as of June 2011 was at 234) above which protests become likely. It suggests “that protests may reflect not only long-standing political failings of governments, but also the sudden desperate straits of vulnerable populations.”

Below is a chart showing time dependence of FAO Food Price Index from January 2004 to May 2011. Red dashed vertical lines correspond to beginning dates of “food riots" and protests associated with the major recent unrest in North Africa and the Middle East. The overall death toll is reported in parentheses. 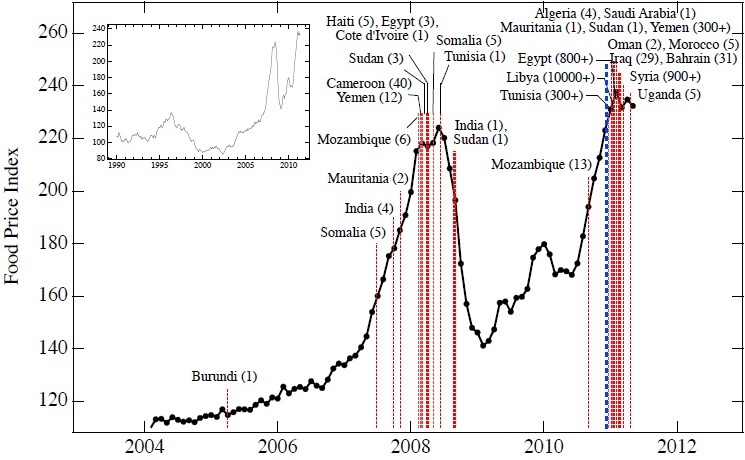 The researchers argue that food prices will permanently rise above the 210 threshold within a yea or two. They argue that the major causes of rise in food prices are investor speculation and ethanol production. Hence, they argue “reducing the amount of corn converted to ethanol, and restricting commodity future markets to bona fide risk hedging would reduce global food prices.”

The FAO food price index just below 220 in July 2012 would increase the changes of having more instability, they predict. 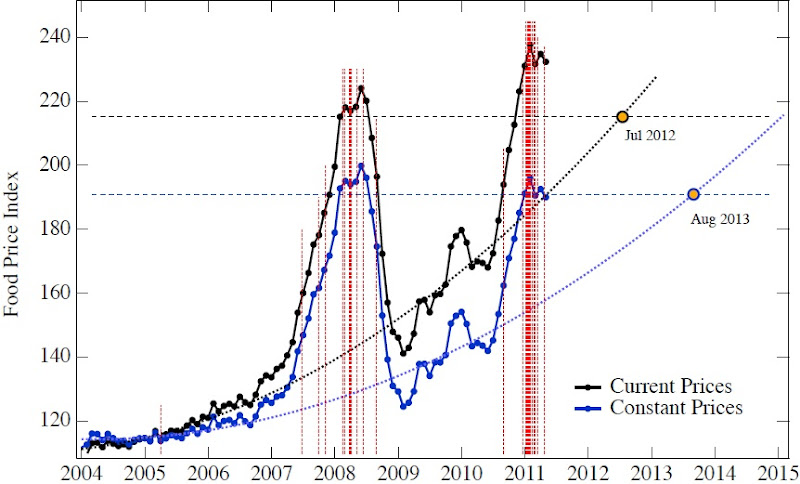 The chart above shows time dependence of FAO Price Index at current prices (upper black curve) and constant prices (corrected for inflation, lower blue curve) from January 2004 to May 2011. Red dashed vertical lines correspond to beginning dates of food riots and events associated with the major recent unrest in North Africa and the Middle East. Black and blue horizontal lines represent the price threshold above which riots are ignited in current and constant prices respectively. Index backgrounds are fitted with a third-order polynomial; intersection with the threshold (July 2012 at current prices, August 2013 at prices corrected for world inflation) represents the point of instability.

Posted by Chandan Sapkota at 1:23 PM No comments: