Using empirical evidence, as well simulation results from a general equilibrium model of trade, we show that the growth in Chinese trade and the price shock of World War I largely account for the flattening out of the skill premium in the 1910s and the subsequent 8% fall in the skill premium between 1920 and 1928. 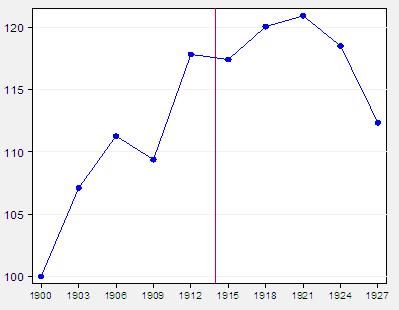 Our findings suggest that, when trade is dominated by the movement of relatively homogenous goods across borders, it may have a considerable effect on wages. The declining wage inequality in China during the second two decades of the twentieth century stands in contrast to studies examining the recent period of globalisation, which emphasise how trade and globalisation have widened skill premiums in developing countries.

The growth in Chinese exports during the first three decades of the twentieth century was centred on products that used unskilled labour intensively and this earlier era of globalisation was less influenced by trade in intermediate inputs (i.e., outsourcing), increases in capital flows, and capital for use with skilled labour. It is these factors that have likely played a role in widening skill premiums today in developing countries.

Posted by Chandan Sapkota at 7:03 AM No comments: