A new ADB Economics Working Paper (by Guanghua Wan and Iva Sebastian) estimates the percentage and number of poor people living on less than $1.25 a day (PPP) in Asia (below I have included discussion on South Asia only). The report argues that despite the financial crisis and food and fuel price hikes, the number of poor people in Asia living below $1.25 a day decreased by 150 million between 2005 and 2008 (from 903.4 million in 2005 to 753.5 million in 2008). However, “the reduction was generally slower compared to the previous period.” In Asia, the HCR fell from 27.1 percent in 2005 to 21.9 percent in 2008.

Overall, three countries (Bhutan, Uzbekistan and Cambodia)in South Asia saw over 10 percentage points decline in head count ratio (HCR) between 2005 and 2008. In 2008, Nepal had the highest proportion (52.04 percent) of people below the poverty line of $1.25 a day. This has not changed much in 2010 (50.51 percent), according to the estimated figure. [Now, this stands in contrast to NLSS III findings, which showed that in six years time (2004-2010) absolute poverty declined from 31.5 percent to 13 percent,  a 18 percentage points decline in absolute poverty. Note that the poverty threshold, measurement and years (income by ADB versus consumption plus access to basic services by Nepali government) considered by ADB and Nepali government are different.] 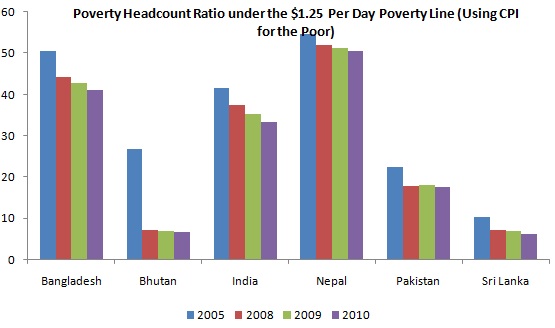 Based on poverty estimates and survey, where appropriate, the authors estimated poverty figures for 2009 and 2010. They estimate that there were 658 million extreme poor in Asia,  18.7 percent of total population in 2010. The impressive growth rate in China and India and in East Asia contributed to poverty reduction. The paper argues that economic growth is a necessary condition to reduce poverty. Still, Nepal’s recent experience shows that you can reduce poverty with stagnating growth rate (a different variable was at play—remittances).

The estimated number of poor people between 2008 and 2010 decreased in all countries except for Nepal and Pakistan. Comparing estimated number of poor between 2009 and 2010, in South Asia, only Nepal saw an increase. As mentioned earlier, this is surprising given the results of NLSS III. If the ADB researchers use the latest data from NLSS III, I think they will get substantially different estimate for poverty in Nepal.

Posted by Chandan Sapkota at 1:54 PM No comments: