Impact of trade blockade on expenditure and revenue

The fiscal situation till the mid-year of FY2016 looks pretty bad. All components under the expenditure and revenue headings are down. It can mostly be attributed to the supplies/trade blockade, which went on for about four and a half month and whose impact will linger on in the months ahead as well. This lingering effect will continue to impact growth and inflation well into the next fiscal year. The supplies blockade is going to be more damaging to the already weak economic fundamentals than is commonly perceived by politicians and some analysts. There is no fast-track recovery without fast-track measures!

To recover quickly, more than doubling of effort both on bureaucratic and trade/supplies fronts is required. It means accelerating spending by taking unconventional measures as and when required. The unconventional measures I am talking about is bypassing of some of the hurdles in project implementation and procurement clearances (more ambitious leaders would even go for quick amendment of Acts and roll out updated policies) in key infrastructure projects, mostly energy, roads, urban and irrigation sectors. The rationale is simple: two doses of extraordinary economic shocks (earthquake and blockade) have crippled the economy and hence ordinary ways of doing projects and decision-making are not going to make a dent. It will require higher level decision (Cabinet and political) plus aggressive bureaucratic work to get thing in order as soon as possible. This is not the time to wait for months to bring out policies and amendments to Acts, and then think of starting work. 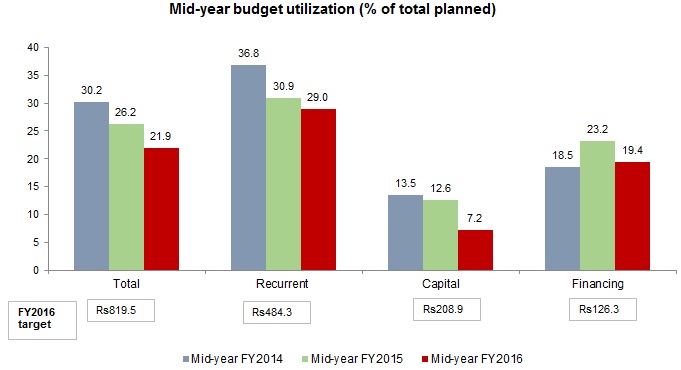 On the revenue front, the story is the same and there was little the government could do (on expenditure side, despite the blockade no one was restricting the bureaucrats and government to prepare necessary project planning and tender documentation, which really sets the stage for faster spending in the second half of fiscal year). Revenue in all sub-headings were below the half-year target.

Total revenue mobilization was just 34.6% of FY2016 target. It is lower than 46.9% mobilization in the corresponding period in FY2015. Tough road ahead to achieve the target but, not as tough as it would be to achieve expenditure targets (because most of the revenue is autonomous in the sense that increase in imports automatically raises revenue if the revenue officials do the job rightfully). The government has revised down the revenue target to Rs430.34 billion (against original target of Rs475 billion). 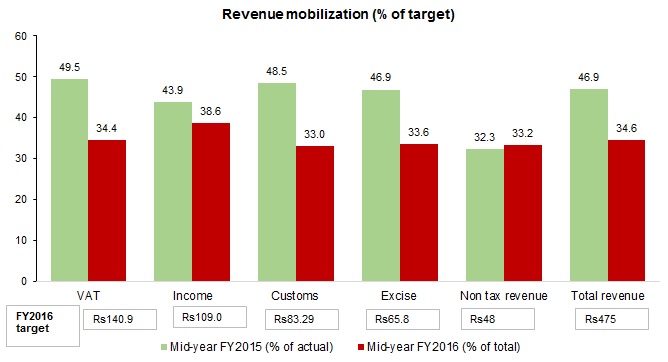 In a nutshell, the dismal half yearly fiscal numbers reflects the crippling impact of trade/supplies blockade. Without aggressive efforts in budget execution, the revised 2% growth target for FY2016 is too ambitious. Here is more on the impact of the earthquake and blockade.
Posted by Chandan Sapkota at 2:23 PM