Costs of strike/shutting down Nepal (bandas)

In my latest Op-ed I estimate the costs of strike or closing down a country. It is called banda in Nepali. Political parties, student unions, ethnic populations and anyone trying to show discontent over government policies call for banda and disrupt normal live and economic activity. There is only loss and pain (and no gain) from bandas.

Organizing strikes (popularly known as bandas) have been the easiest way to either show discontent over government policies or to press for one that serves the interest of a certain group. The people dislike bandas because it never serves their interest. It costs them their freedom, vocation and income. Frustrated by the disruption of normal life, youths have initiated a campaign DIE Nepal Bandh DIE. Even Mother’s Groups in various cities have protested against bandas.

It has been a cancer to the industrial sector, whose contribution to the GDP has nosedived in recent years. A World Food Programme survey conducted last year in Tarai showed that 93 percent of food traders identified bandas as a major constraint to do business. Almost 14 percent of traders were forced to close down their businesses. According to Enterprise Survey 2009, 62 percent of enterprises think instability is the biggest constraint.

What are the costs of bandas to the country and importantly to the public? By looking at the cost incurred by each sector if it is shut down for a day, I did a quick back-of-the-envelope calculation. The numbers are startling: On an average, one day banda would cost Rs 1.96 billion, which is around 88 percent of the total value of goods and services produced in the country in a day. The industrial sector alone would suffer over Rs 346 million per banda day. Yes, you read it right. The country bleeds enormous amount in lost production and revenue.

The economy is divided into three major sectors: Agriculture, industry and service. The agriculture sector consists of two sub-sectors: Agriculture and forestry, and fishery. The industrial sector consists of mining and quarrying; manufacturing; electricity, gas and water; and construction sub-sectors. The service sector is composed of nine sub-sectors: Wholesale and retail trade; hotels and restaurants; transport, storage and communications; financial intermediation; real estate, renting and business; public administration and defense; education; health and social work; and other community, social and personal services. Each sub-sector’s contribution to GDP is different. Depending on the level of market integration, bandas impact these sub-sectors either fully or partially.

I look at two scenarios to estimate the cost of bandas. In the first scenario, agriculture and forestry; public administration and defense; education; and health and social work sub-sectors are not affected by bandas. In the second scenario, all sectors except 40 percent of agriculture and forestry sub-sector are affected by bandas. This is a reasonable assumption because bandas do not affect market transactions of all agricultural goods. No matter what, people do trade and consume bare minimum goods for survival. The rigidity value, which I define as the responsiveness of agricultural sector to bandas and assume it to be 40 percent, varies depending on the intensity and breadth of bandas. The less responsive the agricultural sector (i.e. the more rigid), the less it is affected.

Under the first and second scenarios, the cost would be at least Rs 1.23 billion and Rs 1.96 billion per banda day respectively. The second scenario is most likely when there is a nationwide strike. The first scenario is likely when there is a strike in certain parts of the country. Though these numbers might differ from other estimates with different assumptions, they nevertheless give a fairly good picture of the costs associated with bandas.

On an average, one day banda would cost Rs 1.96 billion, which is around 88 percent of the total value of goods and services produced in the country in a day. The industrial sector alone would suffer over Rs 346 million per banda day.

Based on the second scenario, let me put the costs in perspective. On average, one hour of banda would cost at least Rs 82 million to the economy. In other words, each person in the country would lose Rs 69 per banda day. If we consider the working population only, i.e. 15-64 years, then the cost would be Rs 117 per banda day. Furthermore, if there were a rural employment program that provides jobs and pays Rs 100 per day to people below the poverty line during the lean agriculture season, then one day of banda would have cost over 218,190 rural jobs.

The total cost would be even higher if we add indirect costs. For instance, bandas are complemented with destruction of public and private infrastructures, which costs millions to rebuild. Also, a few hours of economic activity are lost before the sub-sectors bounce back to full gear after bandas. Besides affecting the existing as well as future potential of tourism industry, one of the major sources of foreign exchange for the country, it also causes external migration and decline in exports. Rapid decline in exports is one of the reasons for Rs 20 billion balance of payments deficit in the first quarter of this fiscal year.

Frequent bandas trigger capital flight, which is detrimental to long-run economic growth. Partly due to bandas, multinational companies like Colgate Palmolive ceased production last year. The garment industry is near extinction. It is also putting upward pressure on general prices of goods and services, thus contributing to a double-digit inflation rate.

It is frustrating to see political leaders, who promised to develop Nepal like Switzerland, encouraging and initiating bandas. They are depriving citizens of the potential for an increase in per capita income, freedom to pursue one’s dream and vocation, and to live a peaceful life with a hope for a bright future. Bandas have ripped people off the very things that the organizers promised to bring them. Enough is enough. Say NO to bandas! 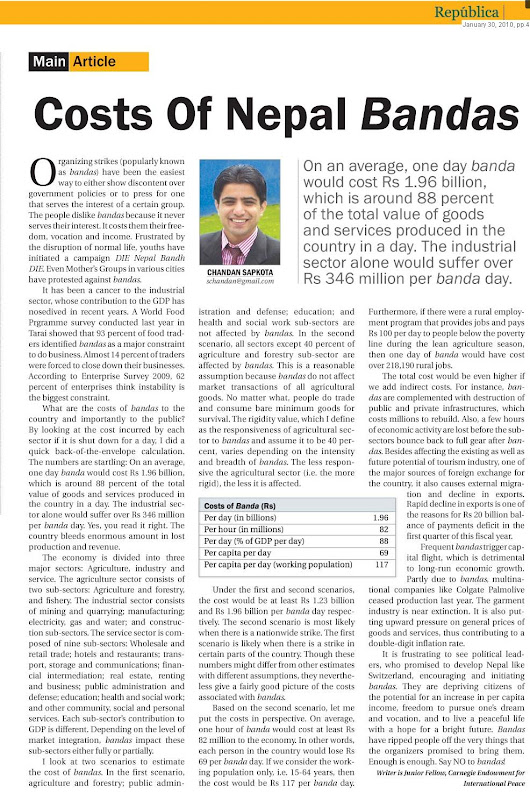 Posted by Chandan Sapkota at 9:04 AM