A lot has been written about the impact of the demonetization shock on 8 November 2016 in India. PM Narendra Modi's government took a surprise decision to withdraw IRs1000 and IRs500 denomination currency notes (about 86% of value of total notes in circulation) to rein in corruption, counterfeiting, terrorist financing, and accumulation of black money (income that’s hidden from tax authorities). While the move is generally good for the economy over the medium and long terms (higher GDP growth, tax compliance, tax revenues, digitization, lower interest rates as liquidity in banking sector increases, etc), it had significant impact on economic activity in the short term, especially due to the botched implementation (shortages of cash, confusion, temporary withdrawal limits, sporadic bank closure due to the inability to withstand demand, etc). 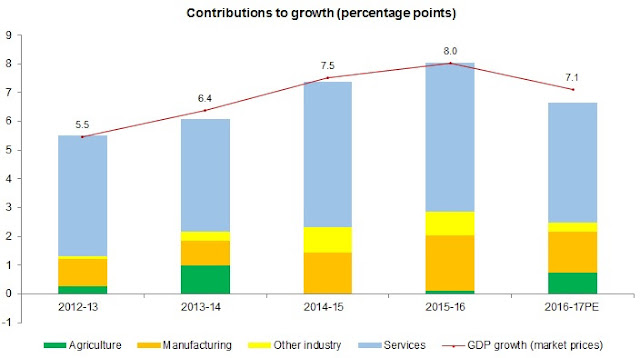 Provisional estimates show that economic activities (at basic prices) decelerated to 7.1% in FY2017 (April 2016 – March 2017) from 8% in FY2016. GVA growth (at basic prices) was 6.6% in FY2017. While the favorable monsoon boosted agricultural output by 4.9%, industrial and services outputs grew by 5.6% and 7.7%, respectively. These are lower than 8.8% and 9.7%, respectively, in the previous year. Within industrial sector, mining and quarrying and construction outputs decreased the most as demonetization (mainly through shortage of cash to conduct daily transactions) dented transactions and payments (both formal and informal ones). Mining and quarrying grew by just 1.8% compared to 10.5% in FY2016. Similarly, construction activities grew by 1.7%, sharply down from 9.7% in FY2016. Manufacturing activities also slowed down compared to the previous year. Meanwhile, within services sector, wholesale and retail as well as hotel and restaurant activities slowed down. Same with financial and real estate activities. Note that, agriculture, industry and services sectors constitute 15%, 31% and 54%, respectively, of gross value added. 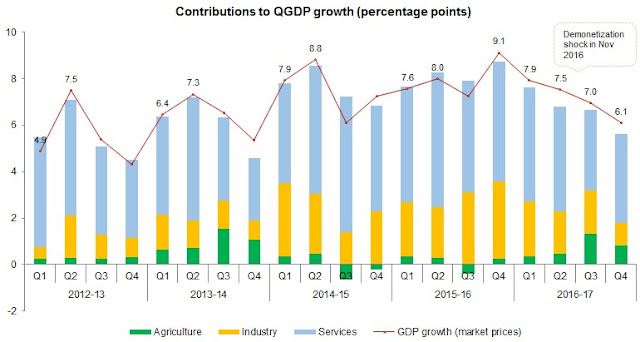 If we look at the quarterly estimates of GDP, the deceleration is faster after Q2 of FY2017 (November falls in Q3). Economic activities are usually robust in the first two quarters as the government tends to front-load spending and households tend to purchase goods ahead of the festival season in the third quarter. However, in FY2017, economic activities, especially industrial and services, slowed down in all the four quarters. In a way, the economy was starting to cool off even before the shock in the third quarter and then demonetization accelerated the downward slide. Also, note that in FY2016 India updated the way GDP is computed, especially moving from GDP at factor cost to reporting GVA at basic prices plus base year was changed to 2011-12 for GDP, IIP, CPI, and WPI as well. As such, nominal GDP growth (market prices) in FY2017 is provisionally estimated at 11%, which is marginally lower than the no-demonetization scenario of about 11.9% (CSO’s estimate before demonetization). 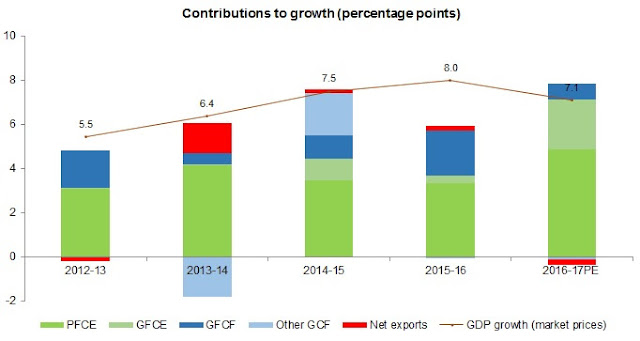 Now, the expenditure side data reveal kind of similar narrative. Consumption grew by 10.5% (compared to 5.7% in FY2016) led by a notable growth of government consumption (20.8% vs. 3.3% in the previous year). Private consumption, which constitutes about 84% of total consumption and 56% of total GDP at market prices, grew slightly higher than in FY2016. Demonetization seems to have dented investment the most, pulling down overall GDP growth. Gross capital formation grew by just 1.7%. Within it gross fixed capital formation grew by 2.4% (compared to 6.5% in the previous year), led by a dip in private fixed capital formation across all sub-sectors (particularly investment in dwellings and building structures, and machinery and equipment— these together account for about 91% of private GFCF).

There was some improvement in net exports (as export growth outstripped import growth), but it was not sufficient to compensate for the dip in investment. The big gap between the GDP growth (market prices) line and the stacked up bars in FY2016 is due to the large discrepancies, which shot up drastically in that particular year (remember the data revision mentioned above and the statistical discrepancies associated with it). 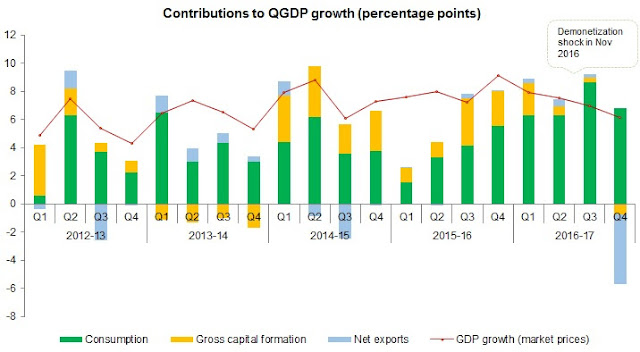 If you look at the quarterly GDP data on expenditure side, the narrative is similar to the one mentioned above for quarterly GDP data on supply side. After the demonetization, government consumption increased drastically but gross investment and net exports slowed down. In fact, gross capital formation and net exports registered negative growth in Q4. 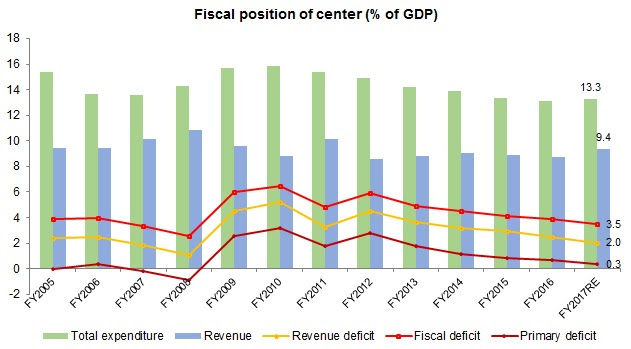 Now, let us look at the impact on public finance. The rush to declare hidden income and deposit it in banks after November 2016 seems to have favored the government (increase in revenue) and banking sector (increase in liquidity). Revenue (tax and non-tax) increased by 19.1%, the highest in the last six years (surprisingly, share of monthly revenue between Nov-Mar remained pretty much unchanged: 49.5% in FY2017 vs. 50.8% in FY2016— folks definitely paid more taxes in the last five months of FY2017 compared to FY2016, but the distribution was same).

As a share of GDP, center’s revenue increased to an estimated 9.4% of GDP (quite low considering the revenue mobilized by other comparable emerging economics, but then we need to also look at combined revenue of center and state, which is around 20% of GDP), up from 8.7% of GDP in the previous year. Recurrent spending grew by 12.8%, up from 4.8% (this complemented to some extent the slowdown in private consumption) but capital spending growth slowed down to 10.6% from 28.6% in the previous year. Overall, fiscal deficit is estimated to be within 3.5% of GDP and primary deficit 0.3% of GDP (both an improvement compared to previous year). 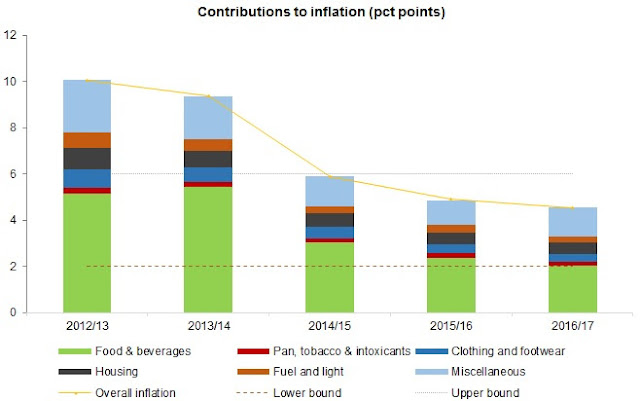 Demonetization seems to have had a favorable effect (together with bountiful harvest due to good monsoon, and low fuel prices among others) on inflation by dampening consumer demand. Inflation has been decelerating in recent months and is far below 6.1% recorded in July 2016. Food prices, which has 45.9% weight in CPI basket, have cooled off substantially, but consumer prices of tobacco have grown pretty consistently, and housing and fuel prices are heating up. Demand for durables and everyday items (under miscellaneous heading) is cooling off. Overall, annual average (monthly) inflation of 4.5% for FY2017 is between RBI’s lower and upper bounds of 2% and 6%, respectively (average of 4%). The largest contribution to CPI inflation in FY2017 came from food & beverage prices, followed by miscellaneous items; housing; clothing and footwear; fuel and lighting; and pan and tobacco products. 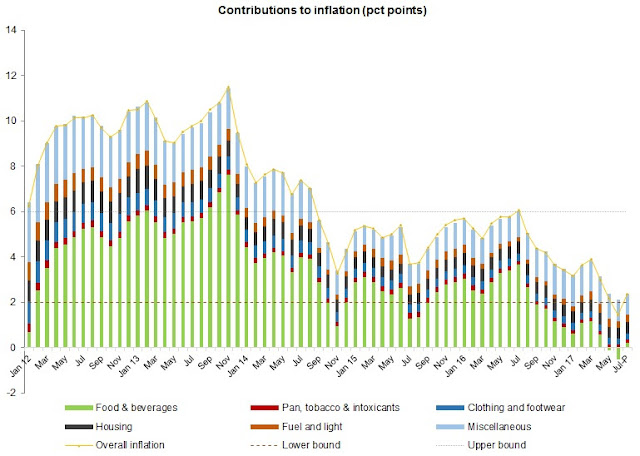 The wholesale price index shows a bit different picture. It was on a downward spiral since July 2104 until August 2015, and then started to pick up till February 2017 before declining. The WPI inflation for three months following the demonetization shock shows no sign of modereation. However, after that it seems to have had an impact. 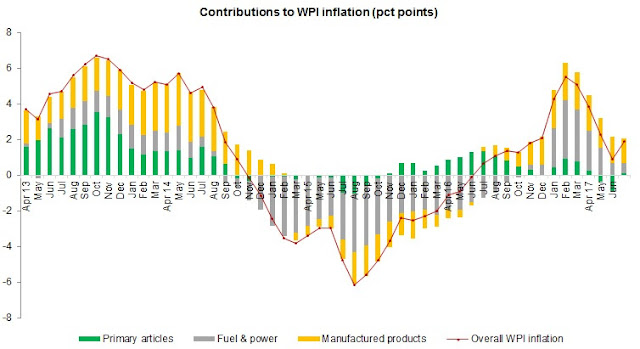 If we look at IIP, then there seems to be an impact after November as demand for manufacturing goods (which has 77.6% weight in IIP basket) moderated substantially. Specifically, demand for primary, and capital goods, and consumer durables slumped (in other words, contraction of urban demand). In May, IIP growth was negative. This might have come from both demand and supply sides. The depressed consumer demand may be caused first by the immediate drop in formal sector demand and then by a (second round) drop in informal sector demand (official statistics pick up the first one faster and then the slowdown in formal sector is reflected as further dip in formal sector demand after few months). In other words, the demand shock in informal sector takes some time to reflect as demand depression in formal sector. This might have slowed down supply of investment. Meanwhile, demand for investment may also be slowing down (and consequently bank credit has contracted) due to waning confidence about returns and consumer demand.

Anyway, both CPI and WPI inflation are expected to rise (but still stay between the RBI’s lower and upper bounds) as demand depressing effect of demonetization dissipate and consumer demand for both perishable as well as durable goods gain some momentum (especially coming from the hike in public salary and allowance, and heating up of vegetable prices). Also, GST may lubricate the rusty industrial engines and boost both production and investment. Government, meanwhile, needs to enhance capital spending by accelerating project implementation (stuck by a myriad of bureaucratic as well as legislative factors— land, environment, tax incentives clearance, etc). Both private and public capital formation needs to increase. It needs to be seen how overly leveraged companies will increase investment and how government speeds up capital spending (especially in rural housing, roads & bridges, and other infrastructure projects; but potential farm loan waivers by states mean that they will have less fiscal space to increase capex).