Trade blockade was more damaging to Nepalese economy than the earthquake

The Central Bureau of Statistics (CBS) just released its GDP growth projection for FY2016. The growth projection is quite close to the latest IMF projection. It offers further clarity on the impact of the trade blockade and supplies disruption (which lasted for four and a half months) and the lingering effects of the earthquake. 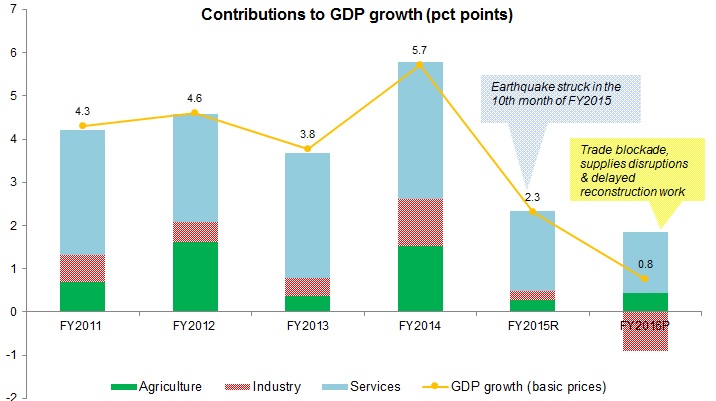 The debilitating impact of trade blockade and supplies disruptions is visible from the negative growth rate of mining and quarrying (-6.5%); manufacturing (-10.1%); electricity, gas and water (-1.7%); construction (-4.0%); wholesale and retail trade (-1.1%), and hotels and restaurants sub-sectors (-4.9%). Furthermore, within the services sector, growth rate of transport, storage and communications sub-sector was lower than in FY2015.

All of these sub-sectors are import-dependent either for final goods or intermediate goods or raw materials (including petroleum fuel and cooking gas). The effect of these unexpected blows will linger on in the coming months as economic activities are severely disrupted and dislocated by the double whammy of earthquake and blockade/supplies disruption. The acceleration of reconstruction work will be a major factor to stimulate economic activities and to expand potential growth.

Given the reduction in paddy, wheat and millet production, the CBS's growth projection for agriculture sector looks optimistic. I think the revised figures later in FY2017 will show even lower GDP growth rate as figures are adjusted for agriculture and some services sub-sectors. It could be one of the lowest in the last few decades. 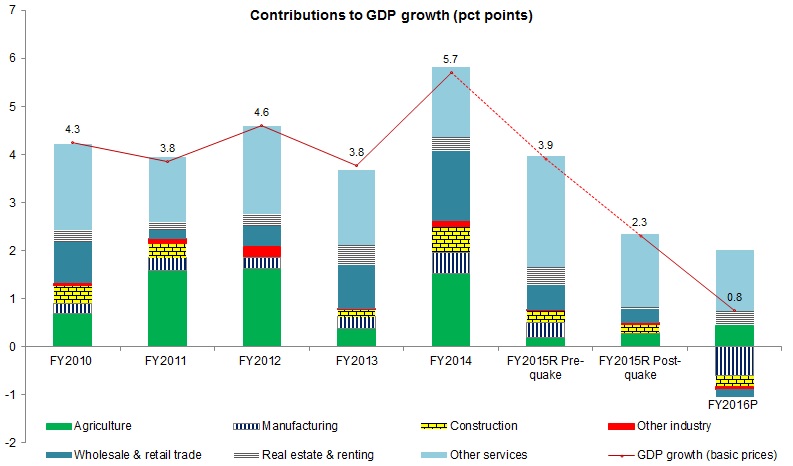 In FY2017, a lot will depend on the weather, normalization of imports and distribution networks (including fuel and cooking gas) and the scale and pace of reconstruction activities. The El Nino conditions are already contributing to droughts and forest fires have destroyed settlements and land. The monsoon rains may not be as plentiful as expected given the conditions so far. This is going to dent agricultural sector’s recovery. The bright spot is that reconstruction work may accelerate and housing grants may be finally distributed to all the eligible households. The former will stimulate domestic production of industrial goods and services. The latter will act as a direct fiscal stimulus that will increase consumption demand.

Also, both could reinforce each other and provide the necessary jolt to the sluggish growth rate. Fast recovery of the services sector will be contingent upon the rate of remittance inflows and normalization of supplies. Overall, considering these prospects and the low base effect, GDP growth could be around 5% to 6% (ambitious) in FY2017. The risk to this outlook is sluggish reconstruction work (plus budget execution), delayed normalization of supplies and a slowdown in remittance inflows. Realistically, it could be between 4% and 5%.

Posted by Chandan Sapkota at 9:42 PM