This is adapted from Box 3 of Macroeconomic Update, August 2015, Vol.3, No.2 (executive summary here, and FY2016 growth and inflation outlook here). It includes FY2015 update on real, fiscal, monetary and external sector, and growth and inflation outlook for FY2016. It provides a comprehensive macroeconomic assessment, including fiscal sustainability, after the April 25 earthquake.

Given that Nepal needs to borrow a higher amount both internally and externally (cumulatively about 9% of GDP over the next five years) to finance reconstruction projects, and tax revenues being barely sufficient to finance recurrent spending, Nepal’s fiscal policy will need to be more prudent in the coming years.

Nepal has a very low fiscal deficit to start with when compared to regional economies and low and lower middle income economies. In FY2013 and FY2014, robust revenue growth (including grants) along with under-spending of the capital budget resulted in a fiscal surplus. This is not ideal for a low income country with huge infrastructure deficit that is constricting overall economic potential. Nepal needs about 8% to 12% of GDP in annual investment in infrastructural till 2020 to close its infrastructure deficit, accelerate inclusive economic growth, and create increased jobs. Hence, increasing borrowing to a fiscally prudent level to fund productivity-enhancing capital investment will be of paramount importance.

Primary and fiscal balances (% of GDP) 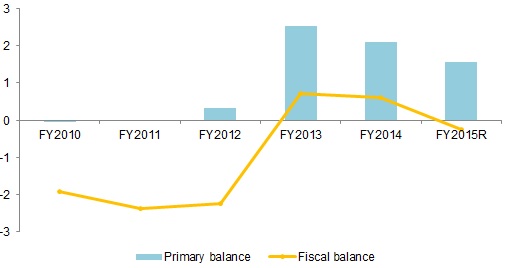 Fiscal sustainability over the medium to long term can be assessed by looking at the real interest rate, exchange rate, inflation, GDP growth, and the debt stock.

At present, Nepal’s debt stabilizing primary balance is about -1.2% (Table 3.1), which means that it is the primary deficit required to keep debt to GDP ratio constant at FY2015 level (25.6% of GDP). It assumes a 10% depreciation of the currency against the US dollar (which then increases outstanding debt payment), average real interest rate on total government debt stabilizing at FY2015 level (weighted average of real interest rate on domestic and foreign currency debts), and GDP deflator (proxy for inflation) and GDP growth averaging 7.5% and 5.0%[2], respectively, over the medium term. Alternatively, it indicates that if Nepal judiciously utilizes borrowed money on productivity-enhancing investment projects, it has ample fiscal space (mostly borrowing on concessional terms). In FY2015, primary balance amounted to 1.6% of GDP.

Furthermore, even after taking into account the need for higher borrowing to finance public sector investment needs (an additional 10% of GDP cumulatively over the next ten years), the country can still maintain overall fiscal sustainability. It translates into a targeted debt stock of about 35.6% of GDP by 2025 (Figure 3.1), which can be maintained by a combination of the following scenarios:

Scenario 2: If the public debt target is increased by five percentage points of GDP only (increasing public debt stock to 30.6% of GDP by 2025 assuming a slower disbursement) then primary balance requirement after 2020 will decrease (maintaining other assumptions as they are in scenario 1).

In addition, if the government’s spending capacity is drastically enhanced, an additional 5% of GDP could be spent in capital projects throughout the country (i.e. not restricted to earthquake-hit areas) to close the infrastructure gap. Incorporating this scenario, the along with the following assumptions would still result in a manageable fiscal situation (a larger primary deficit and cumulative public debt stock of 40.6% of GDP by 2025)

Scenario 3: (i) primary deficit of 1.2% of GDP till FY2017 and then disbursement accelerates much faster than in scenario 1 (reconstruction expenditure amounting to an additional 10.0% of GDP and a further 5.0% of GDP equivalent of expenditure to close infrastructure gap in remaining areas of the country) leading to increase in primary deficit to 4.1% of GDP from FY2018 to FY2025; (ii) real interest rate of -0.1; and (iii) GDP growth of 4.8% in FY2016; 6.0% in FY2017 and 7.0% till 2025 (higher spending accelerates economic growth as well). It assumes GDP deflator of 7.5% and currency depreciation by 10%. Traditionally, countries having public debt of 40% of GDP are considered fiscally sustainable. 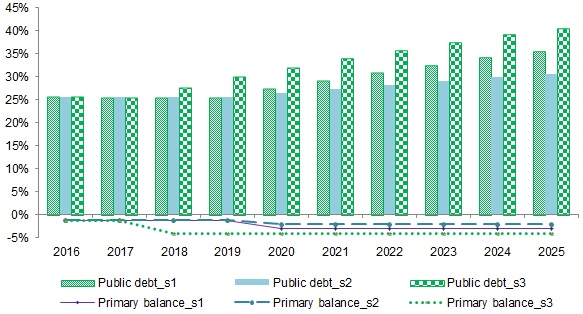 Overall, Nepal’s average weighted real borrowing rate is much lower than the GDP growth rate, indicating that a small primary deficit would not jeopardize fiscal sustainability. It opens up more fiscal space, which needs to be exploited by the government by enhancing absorptive capacity with respect to productivity-enhancing capital investment, i.e. avoiding inefficient capital accumulation or using such borrowed money to finance recurrent expenditure. The availability of funds for reconstruction should not be an issue. Drastically enhancing absorptive capacity, however, remains an unresolved issue.

Posted by Chandan Sapkota at 2:13 PM