Will Nepal graduate from LDC category by 2022?

[This blog post is adapted from the issue focus of Nepal’s Macroeconomic Update, August 2013, published by the ADB.]

The government’s recently approved approach paper to the Three Year Plan (TYP) FY2014-FY2016 envisions uplifting Nepal from the current Least Developed Country (LDC) category to a developing country status by 2022. In the previous TYP FY2010-FY2013, the government had targeted graduation by 2030. The rapid increase in the country’s per capita gross national income (GNI) as well as significant progress on key social indicators has encouraged the government to aim for this ambitious target, which is incidentally in line with the Istanbul Programme of Action (IPoA), 2011-2020, an outcome of the United Nations Least Developed Country (UNLDC) IV meeting held in Istanbul on 9-13 May 2011. The IPoA aims to enable half (24 out of the 48) of the LDCs meet the criteria for the graduation by 2020. It also recommends LDCs to integrate the IPoA into their national and sectoral development programs and strategies.

LDCs are low-income countries suffering from the most severe structural impediments to sustainable development. They benefit from special support measures from the donor community and preferential treatment in trade agreements. They get preferential market access to developed countries and are provided 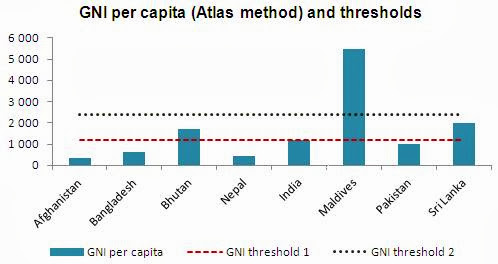 special non-reciprocal treatment in regional and bilateral trade agreements. The European Union provides duty-free access to imports of all products from LDCs under its ‘Everything but Arms’ (EBA) initiative. Furthermore, the Enhanced Integrated Framework (EIF)—a multi-donor, multi-agency program—assists LDCs in boosting their trade related capacities, including operational support to national implementation arrangements related to trade strategy, preparing and updating the Diagnostic Trade Integration Study, and supporting activities on mainstreaming trade. Meanwhile, the bilateral donors have pledged to provide official development assistance (ODA) equal to 0.7% of their GNI. Some donors such as Japan even provide concessional loans with a 0.01% interest rate and a 40-year repayment period (including a 10-year grace period). Similarly, multilateral development banks provide grants and concessional lending to LDCs.

Criteria and Process for Graduation from LDC Status

Graduating from the LDC category requires progress on three indicators relating to the income-generating capacity of a LDC, its stock of human capital, 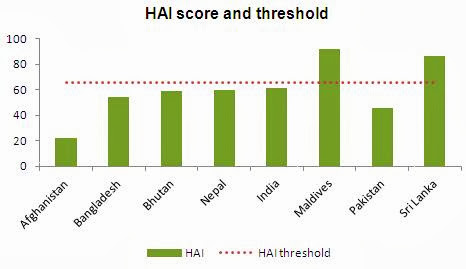 After determining threshold levels for each of the criteria every three years, the Committee for Development Policy (CDP) reviews the progress made by LDCs and recommends a country for graduation[3] from the LDC category provided that the country is eligible at two successive triennial reviews. At least two of the three criteria or per capita GNI higher than twice the threshold (and with a high probability that it will be sustained) must be me 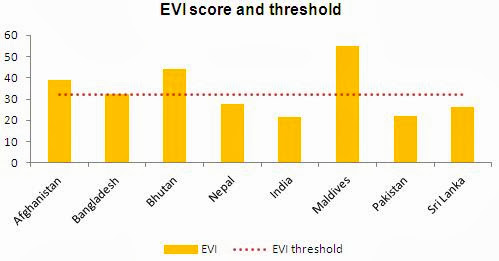 t to be eligible for graduation. Following the recommendation by CDP and subsequent endorsement by the UN Economic and Social Council (ECOSOC), the UN General Assembly (GA) takes note of it[4], three years after which a country will graduate from the LDC category. So far, Botswana, Cape Verde and the Maldives are the only countries that have graduated from LDC category. Samoa is set to graduate in January 2014. While Tuvalu and Vanuatu are recommended for graduation, Angola and Kiribati met the criteria for graduation once and will be reviewed again in 2015.

Although Nepal has already met the EVI criterion, it still has to either increase its per capita GNI by US$770[6] or HAI score by 6.17 before 2015 to be eligible for consideration for graduation. This is because eligibility conditions should be fulfilled during two successive triennial reviews, and the CDP will now review the progress only in 2015. After the review, Nepal will have to sustain the progress through 2018, the next triennial review, only after which the CDP will recommend for graduation. It will then be endorsed by ECOSOC and the UN GA takes note of it (between one and three years). Then only can Nepal graduate by 2022, provided that a transition strategy is prepared for implementation and the thresholds do not change.[7] An alternative path for Nepal’s graduation would be for it to increase its per capita GNI by US$1,960 well before 2022, irrespective of its progress on the HAI and EVI threshold requirement. Overall, substantial efforts would be needed for Nepal to graduate from the LDC category by 2022 particularly in the income front. Nevertheless, an encouraging certainty is that the country will be making clear and substantial progress towards graduation.

The post-graduation scenario will also remain challenging, mostly arising from the implications of the loss of LDC status and associated benefits such as development assistance and preferential treatments in international trade. The concessional lending as well as market entry preferences accorded to Nepali exports in several developed and emerging economies will most likely be eroded. Therefore, prior to the graduation, Nepal needs to strengthen the pre-requisites required to support a stable and high growth rate and continue the momentum on the social development front. It calls for: (i) full and productive utilization of the available development assistance and trade preferences to tackle supply-side constraints, promotion of high value exports, and search for niche markets abroad; and (ii) reorientation of the ongoing structural transformation to strengthen the industrial sector’s and high value production’s contribution to GDP, which will help stabilize the growth rate, raise the income level and create high paying jobs.

The available resources and assistance to tackle the most binding constraints to economic activities have to be effectively utilized with an objective to sustain high growth and rapid poverty reduction. Meanwhile, the challenging task is to make the GDP growth more responsive to industrial sector growth and the high value agriculture production and services activities instead of the less productive and low value agriculture and service sector activities. At the core of it, political stability and good governance are the necessary conditions to effectively make this happen. Overall, the challenges to adequately meet the pre-requisites for high growth and a sustained development path in the post-graduation era are: (i) structural bottlenecks (low quality human resources and deficient skills, weak backward and forward linkages, fragmented value chains, negligible research and development investment, distorted labor market characterized by high minimum wages and low productivity, and policy inconsistencies, among others); and (ii) supply-side constraints (the lack of adequate supply of electricity, transport bottlenecks, lack of raw materials leading to high import content of manufactured goods, inadequate supply of key inputs to boost productivity, and political disturbance, among others).

There is also a need to reorient the ongoing process of structural transformation, especially considering the production disruption caused by the decade-long civil conflict, the exodus of migrant workers, and Nepal’s accession to the WTO. The shift of workers and economic activities to less productive services sector activities instead of the industrial sector being a focal point for their absorption is not normal and doesn’t contribute much to creating a strong foundation for the economy to take off on a high and inclusive growth path in the post-LDC graduation era.[8] The low value added activities such as real estate and housing; wholesale and retail trade; hotels and restaurants; transport and storage, among others constitute almost 34% of GDP, which is equal to that of the agriculture sector’s share of GDP. The manufacturing[9] sector’s share is only about 6.2% of GDP. In fact, the wholesale and retail trade, which is mostly based on imported goods, is larger than mining and quarrying; manufacturing; electricity, gas and water; and construction combined (i.e. the industry sector). Nepal’s industrial sector has been consistently underperforming; and for its income level, though the services sector’s contribution to GDP is relatively high, its impact on growth and employment generation is low (Figure 4). Furthermore, the increase in per capita income as countries get richer is initially associated with the expansion of industrial sector and then after a certain income level, its contribution starts to moderate. However, even with one of the lowest per capita incomes in Asia and the Pacific, Nepal’s industrial sector’s contribution seems to have tanked and have been consistently declining (second chart in Figure 4). 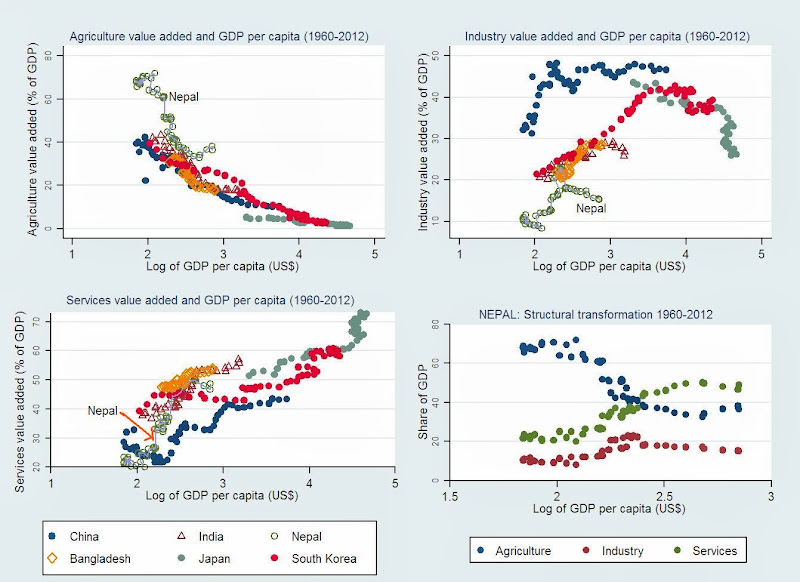 Note: The first three charts agriculture, industry and services sectors valued added (% of GDP) to the log of per capita GDP of China, India, Nepal, Bangladesh, Japan and South Korea over 1960-2012. The last chart shows the evolution of sectoral value added with respect to log of per capita GDP. It shows that the decline of agriculture sector is accompanied by the increase of services sector while the industrial sector is already declining.

A meaningful structural transformation to sustain a high and sustainable growth in the post-LDC graduation era would require beforehand a strong industrial sector and high value added agriculture and services sector activities, with an employment centric strategy to absorb the surplus labor. To promote higher productivity, high value-added production and high income generation, the agriculture sector requires adequate and appropriate commercialization, provision of necessary infrastructure and technology to link with the industrial sector, and promotion of agribusiness activities such as agro-processing, storage, and warehousing, among others. Similarly, for high productivity and value added services sector activities, there needs to be strong backward and forward linkages with the industrial sector along with the narrowing of skills gap required in the market, increase in R&D investment to promote innovation, and investment in education and health sectors to boost the capacity of the economy to sustain progress and prosperity. This would partly position and help sustain the industrial sector as an engine of inclusive growth.[10]

A high and sustainable growth and development in the post-LDC graduation era would require the effective utilization of the current resources to create the pre-requisites for the economy to take off on a high, inclusive, employment-centric and sustainable growth path. Furthermore, there is a need to reorient the ongoing structural transformation to ramp up industrial sector activities and to promote higher value and productive agriculture and services activities.

[1] These are reviewed every three years by CDP. The latest review was done in 2012. The next triennial review will take place in 2015.

[2] The Atlas method is used by the World Bank to estimate the size of economies in terms of gross national income (GNI) in US dollars. According to the World Bank, ‘a country's GNI in local (national) currency is converted into US. dollars using the Atlas conversion factor, which uses a three-year average of exchange rates to smooth effects of transitory exchange rate fluctuations, adjusted for the difference between the rate of inflation in the country (using the country's GDP deflator), and that in a number of developed countries (using a weighted average of the countries' GDP deflators in SDR terms). The resulting GNI in U.S. dollars is divided by the country's mid-year population to obtain the GNI per capita.’ For more: http://go.worldbank.org/IEH2RL06U0

[3] Inclusion in the LDC category requires lower thresholds for all the three criteria: GNI per capita of $992 or less, HAI of 60 or less and EVI of 36 or more. All three criteria must be met.

[9] According to industrial classification, manufacturing is a part of industrial sector, which also comprises of mining and quarrying; electricity, gas and water; and construction.

[10] For this to happen, the country needs to tackle head-on the binding constraints to industrial sector growth, including amicable resolution of labor disputes to create a win-win situation for both workers and employers, and the promotion of FDI to not only increase investment but also to impart critical knowledge and expertise on advanced technologies, innovations, and entrepreneurship.

Posted by Chandan Sapkota at 11:06 AM