The government has come up with a draft approach paper of the upcoming Three Year Interim Plan (TYIP) FY2014-FY2016. It was endorsed by the National Development Council on July 6. The NPC will publish a final version of the approach paper before the Finance Minister unveils the budget for FY2014. It will be the third interim plan (previously, TYIP FY2008-FY2010 and TYIP FY2010-FY2013) as the country is unable to have a full five year plan due to the protracted political transition. The NPC publishes a detailed TYIP after few months of the approach paper’s, which needs to be endorsed by the cabinet, publication.

The upcoming plan has a vision of graduating Nepal from LDC category to a developing country status by 2022. It is consistent with the Istanbul Plan of Action, an outcome of the UNLDC IV meeting held in Istanbul on 9-13 May 2011. More analysis on this specific issue in later blog posts, but for now the major highlights.

Growth rate: The government is targeting an average annual growth rate of 6.0% over the next three years, with agriculture sector growth and non-agriculture sector growth targeted at 4.5% and 6.7%, respectively. Surprisingly, while the NPC has listed targeted growth rate for all sub-sectors , it is missing in the case manufacturing activities, which have seen a consistent decline over the last few years.  Instead, it is combined with mining and quarrying and the combined growth target is 4.7%. Mining and quarrying itself was growing at over 5% in the last few years. Probably, the NPC is not expecting much growth in manufacturing sector as it is still plagued with persistent structural bottlenecks and supply-side constraints. 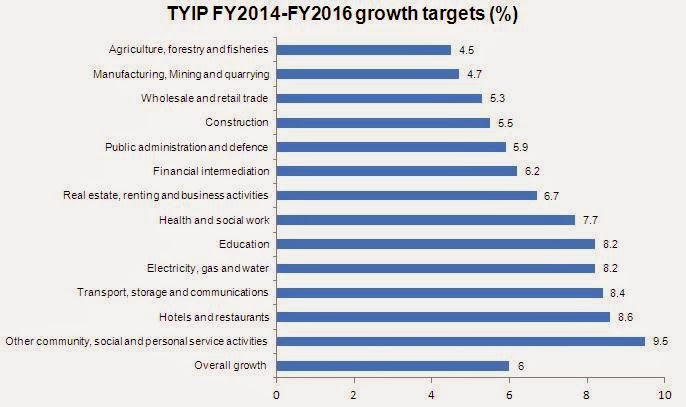 The highest growth at the sub-sectoral level is targeted for community, social and personal service related activities, followed by hotel and restaurant; transport, storage and communication; education; electricity, gas and water; and health and social work (all above 7.5% growth rate). While real estate and commercial activities, and financial intermediation are expected to register growth rate of over 6%, wholesale and retail trade growth is estimated at 5.5%. Note that most of these are driven by remittances-backed demand. In essence, this plan doesn’t aim to change much (wrt economic fundamentals required for promoting high-productivity and jobs-generating activities), but let the economic activities be driven by exogenous factors (mainly remittances sent from abroad). 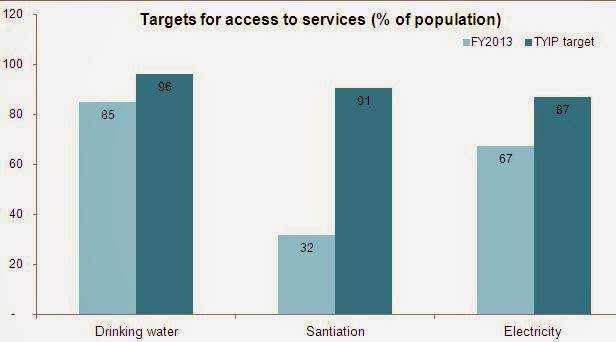 Similarly, the targets for population with access to drinking water, sanitation, and electricity are set at 96%, 91% and 87%, respectively. They were 85%, 32% and 67%, respectively, in FY2013. Furthermore, the government targets to add 668 MW by FY2016 (major contribution coming from the completion of 456 MW Upper Tamakoshi hydropower project). It is targeting cent percent telephone (including mobile) access by FY2016. While aiming to construct 3,000 kms of road, the government is also targeting to link all district headquarter by road transport. 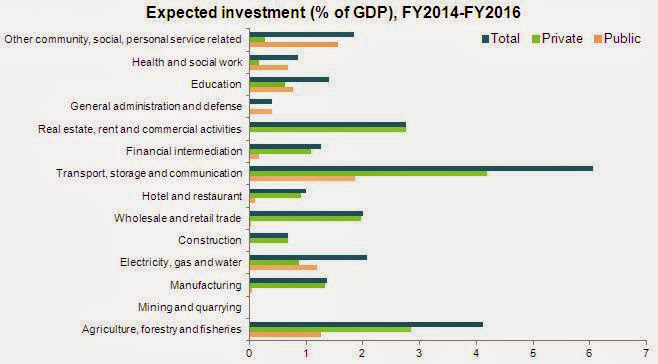 Overall, the government is targeting total investment of about 25.8% of GDP by FY2016, with private and public sector contributing 17.7% of GDP and 8.1% of GDP, respectively. While about 4% of GDP is expected to be invested in agriculture and industry sectors each, the investment target in services sector is about 17.5% of GDP over the next three years. Highest investment of 6.1% of GDP in expected in transport, storage and communication sub-sector.

The incremental capital output ratio (ICOR) has been maintained at 4.9 (think of it as investment as a share of GDP divided by GDP growth rate). It shows the level of inefficiency of capital investment, largely contributed by the lack of prerequisites (energy, roads, ICT, quality of human resources, among others) to ensure productive and efficient investments. The highest ICOR is for electricity, gas and water (22), followed by health and social work (8.9); transport, storage and communication (8.7); hotel and restaurant (7); community, social, personal service related activities (6); real estate and commercial activities (5.5); and financial intermediation (5.5).

Expenditure and revenue: The government is targeting average annual revenue growth (FY2013 constant price) of 13.8%. Based on the assumption that at the end of FY2013, revenue will be 17% of GDP, the government is targeting revenue of 21.1% of GDP by FY2016. However, looking at the numbers provided in the draft approach paper, the revenue target is set at 18.4% of GDP in FY2014, 19.6% of GDP in FY2015 and 20.8% of GDP in FY2016. It indeed is ambitious and even if the revenue growth targets (growth at current prices are usually higher than growth at constant prices) are met, it will be hinged not on domestic economic activities, but on taxes (customs, excise, VAT) on imported goods and services, which in turn are a function of remittances. Foreign grants are expected to be between 3.28% of GDP and 3.33% of GDP. 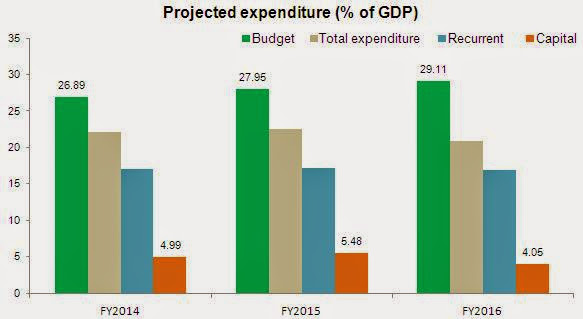 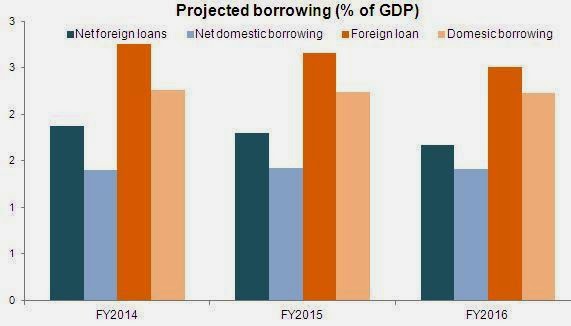 Domestic borrowing is expected to be below 2.3% of GDP and foreign loans 2.8% of GDP. To finance expenditure, the government is aiming to seek more loans from major multilateral and bilateral development partners and reduce the share of domestic borrowing. It will have implications on debt sustainability.
Posted by Chandan Sapkota at 5:44 PM