The long queue at petrol pumps, rationing of LPG, rising NOC’s losses due to increase in international prices on whose basis it purchases from the IOC, NOC’s inability of purchase enough fuel when the subsidy government is offering has to be shouldered by the corporation, and the MoF’s inability to either give sufficient funds to NOC or compel it to restructure (administration, leakages and prices) are recurrent issues. The web of interconnections among these baffles analysts and, as in many cases, beyond some point there is no logic to the fuel prices in market, losses to NOC and supply of fuel (thanks to politics!). 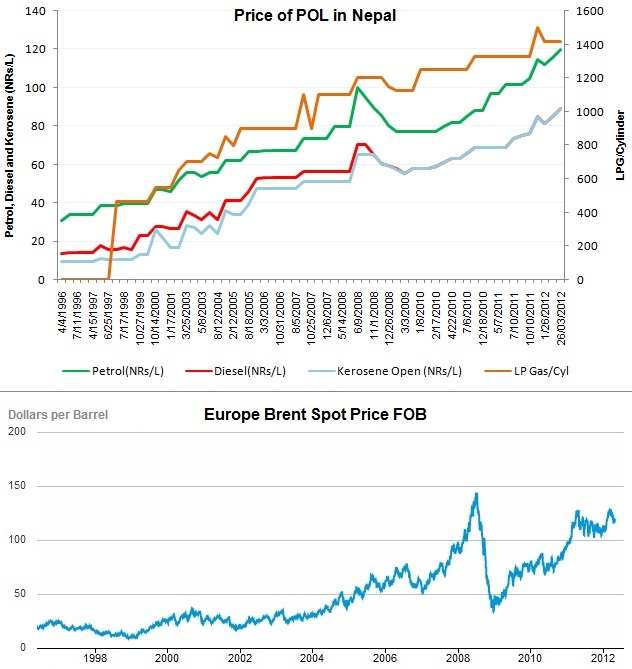 Also be clear that the retail price of POL is high also because of high tariff (VAT, road tax and other charges), insurance and transportation charges, leakages, and NOC’s administrative costs. See the table below for the breakdown of costs for petrol, diesel, kerosene and LPG.

The link between international petroleum prices and inflation in Nepal has been strong since 2007, the same year when load-shedding increased substantially and demand for petroleum products skyrocketed. A recent study by the IMF economists showed that almost a third of the variability in domestic inflation can be attributed to the prices in India and movements of international oil prices. The study found that the responsiveness of food price inflation was significant and quick to spillovers from India’s food prices and the global oil price fluctuations before 2007. However, after 2007 the impact of fluctuating oil prices is more persistent than the spillovers of food prices prevalent in the Indian economy. Even though petroleum prices do not change readily in our economy as they do in the international market, the price fluctuations are seen directly and indirectly in the cost of imported inputs (and final products) used by agricultural, industrial and service sectors.

The consumption of diesel has increased by over 100 percent between 2007/08 and 2010/11 (from 3 lakhs KL to 6.5 lakhs KL). The increase in demand comes mainly from the industries as a result of drastic increase in load-shedding hours. The peak demand for electricity in 2007 and 2011 was 648.39 MW and 946.1 MW respectively. The available energy (NEA hydro, NEA thermal, purchase from IPP and India) in 2007 and 2011 was 3051.82 GWh and 3858.37 GWh respectively. While the average annual average growth of peak demand for electricity between 2007 and 2011 was 9.44 percent, the annual average growth of available energy was 6.98 percent. There is a huge electricity demand and supply gap (on an average the demand is 650-900 MW but supply is around 450 MW). Furthermore, driven by the increasing purchasing power and expansion of trading business (mostly commercial), thanks to remittances, the additional number of consumers has also drastically increased between 2007 and 2008 (from 1.3 million to 2.05 million). The increase in consumption of petroleum fuel (especially diesel and LPG) is inversely related to the supply of electricity (load-shedding hours) in Nepal. What is the solution?

Saving myself from repeating the same arguments on how to handle the situation, let me direct readers to my earlier detail piece on the sorry state of state-owned enterprises, including NOC. Brief points are listed below:

This is what happens when you ration products that have high demand in the market—it leads to a thriving black market. Petrol in mineral water bottles! 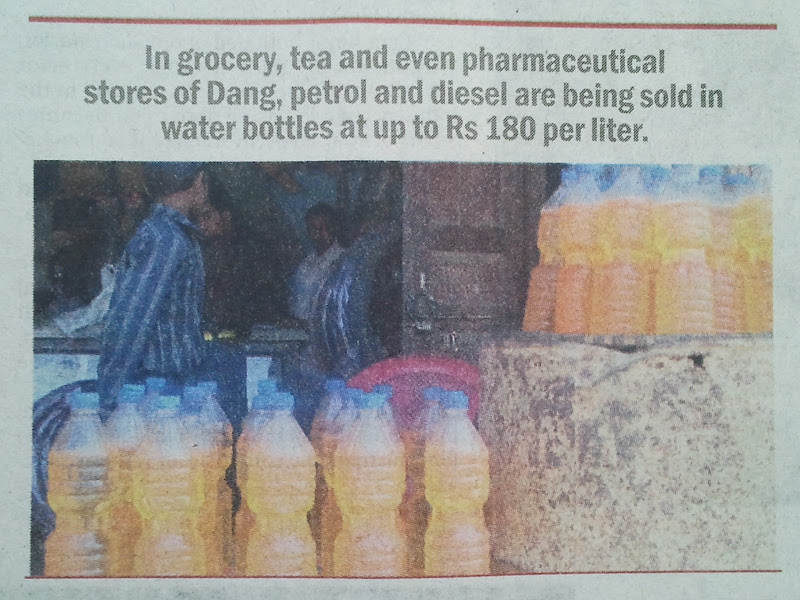 Posted by Chandan Sapkota at 10:36 AM