Nepal was the 4th highest recipient of remittances in 2009

Nepal was the fourth highest recipient of remittances (measured as % of GDP) in 2009. Remittances amounted to 23 percent of GDP in 2009. 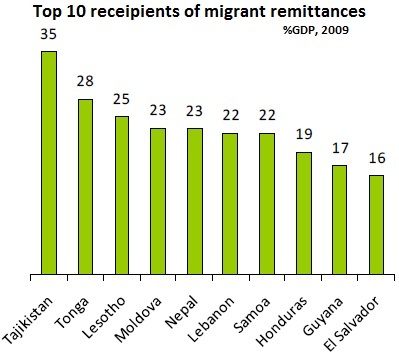 The latest Migration and Development Brief 13 shows that remittances remained more resilient compared to private capital flows during the global economic crisis. It has begun to recover in 2010. It estimates that officially recorded remittances flows to developing countries would be US$ 325 billion in 2010. It will be an increase by 6 percent after a fall by 5.5 percent in 2009. The WB economists forecast that remittances flows to developing countries will increase by 6.2 percent in 2011 and 8.1 percent in 2012 to reach US$346 billion in 2011 and US$ 374 billion in 2012. There are about 215 million migrants (3% of world population) in the world.

UPDATE (2010-11-10): Based on how you look at the number, Nepal was either fourth or fifth highest recipient of remittance. If you look at whole number, it is equal to Moldova’s (so two fourth positions). If you go for decimal number, Nepal’s remittance inflow is one percentage lower (in terms of percent of GDP) than Moldova’s. That way its fifth highest recipient of remittance.
Posted by Chandan Sapkota at 12:49 PM