The effect of global economic crisis on poverty 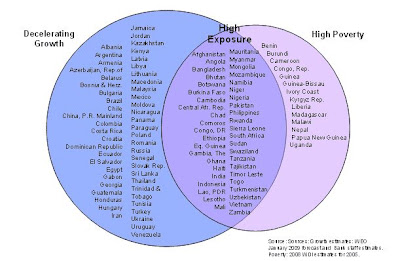 It also paints a gloomy picture about infant mortality. It states that between between 200,000 and 400,000 more babies could die each year between now and 2015 if the crisis persists (this totals to 1.4 to 2.8 million).

What about the capacity of the developing countries to deal with the crisis on their own? A WB policy brief states that one-fourth of the countries have the ability to expand fiscal deficits to undertake significant countercyclical spending. Even one-third of these require aid to take this course of action. All others vulnerable countries are fiscally unable to tackle this problem on their own. The bad news is that only one-third of the countries have the institutional capacity to absorb increased spending even if there were external assistance.

Posted by Chandan Sapkota at 2:10 PM