My latest opinion piece is based on a paper by Iyer and Do. They show that poverty determines the onset of conflict and geography determines the variation of conflict intensity within a country. According to their working paper, a 10 percentage point increase in poverty is associated with 25-27 additional conflict-related deaths and geographic condition such as elevation and the presence of mountains and forests explain a quarter of the cross-district variation in conflict intensity. I discuss some policy implications and tie it up with the Maoists’ ideology.

The increase in the number of PLA recruits and its sympathizers might have little to do with political culture and bourgeois-proletariat drumbeat started by the Maoists. The truth is that conflict is significantly higher in places with greater poverty and lower levels of economic development. The study shows that at any given time, poor areas are significantly more likely to experience the onset of conflict, contingent on the fact that they did not experience the onset in previous period.

The Maoists recruited more militants from districts where the opportunity cost – the cost of next best alternative forgone – of recruiting new members was the lowest. People residing in districts that were socially and economically backward (irrespective of geographic landscape) were drawn into insurgency easily and earlier than residents from other districts because the opportunity costs of joining the armed rebellion was low for them and the economic and political gains for the Maoists was high.

The study also shows that ethnic and caste polarization, land inequality, linguistic diversity and political participation are not significantly associated with violence. This finding raises questions over the real motive of the Maoists’ push for land redistribution reforms. Is it just a populist move to entice more voters or are they genuinely considering scientific land reform that would help accelerate productive activities? Furthermore, in light of this research, it is hard to believe if the Maoists’ rhetoric on the existence of the tussle between bourgeois and proletarians and the need to dismantle the former holds any ground. The Maoists are yet to clearly identify how big of a problem the bourgeois productive structure, if any, pose to economic activity.

This has an important policy implication—policies aimed at increasing the opportunity cost of joining armed outfits should be of paramount importance in order to stop the onset of armed conflict. It can be done by investing in formal, informal and vocational education. This would potentially ensure that the returns to labor (wages) earned by engaging in formal economic activity is higher than the returns from joining armed outfits. Additionally, increasing employment opportunities and livelihood generation activities would also help to serve this purpose. This would potentially give rise to a tendency to deter – even by poorer communities –the emergence and spread of disruptive activities. 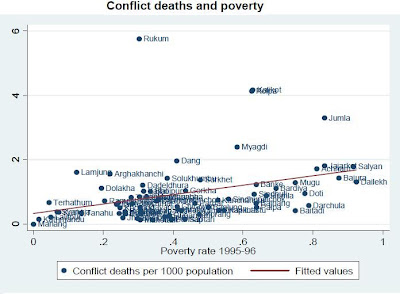 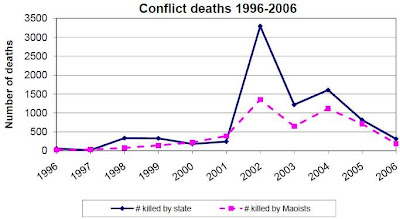 Posted by Chandan Sapkota at 11:10 PM