Food Inflation Watch: Duflo argues for the need for insurance

...Several reasons explain the upward trend in prices, including the demand for biofuels (which consume a significant part of the corn produced worldwide), and the growth and enrichment of the world population (particularly the increased demand for meat in China – paradoxically, it takes more grain to produce a calorie in meat form than it does to produce a calorie in grain form).

Several short-term factors also help to explain the recent price peak. Because the main consumers of rice are also producers, the volume of rice traded is low compared to the volume of rice produced (only seven percent of produced rice is traded). Restrictions by big producers (such as India) can thus have large impacts on the world price of rice, since they affect a large proportion of the volume of rice traded. It keeps the prices in India relatively insulated from what is happening on the world market, however. Wheat harvests have been poor in several major producing countries, rice is suffering from a mysterious parasite in Vietnam, and following accusation of corruption and mismanagement in the last few years, there have been sharp declines in grain stocks maintained by governments to stabilise prices (they are at their lowest levels since 1984). As a result, prices are not only high in general, but also more volatile (another drop in rice prices is expected after the harvests in Indonesia and India); even the financial crisis plays a role: in the current meltdown, commodities offer an interesting betting opportunity.

...So when grain prices rise, some of the poor gain, and some lose – in the short-term. In part, the uproar over food prices reflects a fundamental political economy reality: when some gain and some lose, the voice of those who lose is always louder. This is particularly true of an increase in food prices, which hurt primarily the urban poor. In the medium-term, however, an increase in price volatility is damaging for everyone. Poor families in developing countries are already facing enormous risks (they are often self-employed, they are subject to the uncertainties of weather, and their health is fragile), and there is very little insurance against such risks, apart from their own savings or informal solidarity. Furthermore, these risks are more serious for households struggling to provide the bare minimum. A setback might mean sacrificing the children’s education, or not being able to save a little girl from a diarrhea attack (on this, see a beautiful paper by Elaina Rose, which showed that during drought, the relative survival probability of girls dramatically declines).3 A passing difficulty can leave a permanent scar.

Beyond emergency relief, which the world community is scrambling to organise at the moment, it is essential to establish effective insurance against variability in food prices for the poorest. Many argue now that the way to do it is to stop trade and encourage countries be “self sufficient” in food. This seems of course a third best solution, since the countries would then be entirely dependent on the vagaries of the weather at home. It is also not clear what countries that are net food importers would do (in the long run, the argument goes, they will improve their productivity… however, given Senegal’s climate, producing rice there will always be much more expansive than doing it in Thailand). The traditional method used by developing country governments – maintaining large stockpiles of grain by buying when the price is low and selling when the price is high – has its share of problems. In India, it was said that at some point that there were enough bags of rice in those storage facilities to go to the moon and back. The losses in storage and to corruption were important. Alternatively, the governments can manipulate prices using taxes and subsidies. Or perhaps it is time to be creative and make the international financial services actually work for the poor: governments could provide price insurance for the poor (in the form of transfers to some when price are high, and others when price are low). Countries that are neither net sellers nor net buyers could do this internally, and countries that are either net sellers or net buyers should be able to sell this insurance on the world market. There is nothing straightforward about these solutions. The key point, however, is that it is urgent to think of something.

The Cost of Food: Facts and Figures (from the BBC News) 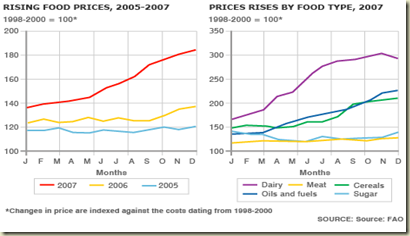 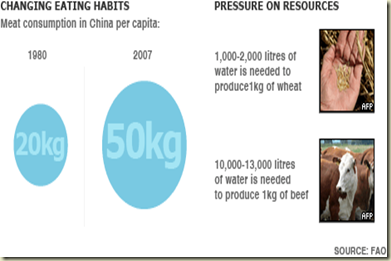 Posted by Chandan Sapkota at 2:08 AM