The upside of rising global food prices-- Is there any?

An interesting debate is going on about the impact of food prices in positive direction-- actually trying to find out "an upside for humanity in the rise of food prices".

Here is the proposition posed by The Economist :

"There is an upside for humanity in the rise of food prices."

Here is an excerpt from an email I got from Lauryn Nicasio on behalf of the ongoing debate:

Although we can never overlook the grave situation posed by rising food prices, we hope to dissect the issue and view it from fresh perspectives to see if it can have a positive impact. For example, do rising food prices benefit farmers? Can they lead to development of safe, genetically modified foods which in turn can help developing nations with marginal farmlands become self-sustainable? And are the shorter-term pains of creating biofuels worth the longer-term gains of reduced transportation costs?

Here is the debate hall

Here is Joachim von Braun (I agree with him!)

I think the answer is "it depends"...some farmers can gain from it but in the long run many more will suffer...we have to look at the net effect, especially from the perspective of farmers in the developing countries. Some initial thoughts:

Here is a good summary of the implications of rising global food prices. A more extended discussion from a variety of sources on this issues here. Also see this. 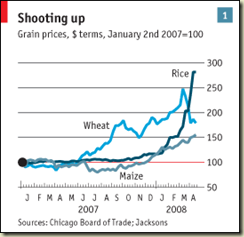 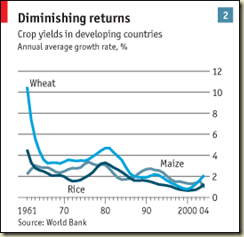 Posted by Chandan Sapkota at 11:58 AM